I will have you recall John 19:31-37 -  Now it was the day of Preparation, and the next day was to be a special Sabbath. Because the Jews did not want the bodies left on the crosses during the Sabbath, they asked Pilate to have the legs broken and the bodies taken down.  The soldiers therefore came and broke the legs of the first man who had been crucified with Jesus, and then those of the other.  But when they came to Jesus and found that he was already dead, they did not break his legs.  Instead, one of the soldiers pierced Jesus' side with a spear, bringing a sudden flow of blood and water.  The man who saw it has given testimony, and his testimony is true. He knows that he tells the truth, and he testifies so that you also may believe.  These things happened so that the scripture would be fulfilled: "Not one of his bones will be broken," and, as another scripture says, "They will look on the one they have pierced."

This prophecy of no bone broken at The Crucifixion of Jesus is foreshadowed in Old Testament verses.
"a band of evil men has encircled me, they have pierced my hands and my feet.  I can count all my bones;" - Psalm 22:16-17

A righteous man may have many troubles, but the LORD delivers him from them all; he protects all his bones, not one of them will be broken. - Psalm 34:19-20

Jesus is foreseen as the Christian's Passover Lamb that was slain without the breaking of any bones.

"It must be eaten inside one house; take none of the meat outside the house. Do not break any of the bones." - Exodus 12:46
"They must not leave any of it till morning or break any of its bones. When they celebrate the Passover, they must follow all the regulations." - Numbers 9:12

Joseph Zias, former curator of Archaeology/Anthropology for the Israel Antiquities Authority from 1972 to 1997 has posted some interesting thoughts on crucifixion in the time of Jesus (http://www.centuryone.org/crucifixion2.html).  The following information is from his article "Crucifixion In Antiquity:  The Evidence".

"The complicated and much debated issue regarding how the individual expired on the cross has generated widespread debate over the years. While many researchers have believed that death occurred as the result of a ruptured heart due to the story in John 19:34 of the water and blood flowing out of the wound, pathologists such as Zugibe, have ruled this out as medically untenable. Other scholars have regarded asphyxiation as being the cause of death, however the latest research findings have shown the issue to be more complicated, depending upon the manner in which the victim was affixed to the cross. A series of experiments carried out by an American medical examiner and pathologist on college students who volunteered to be tied to crosses, showed that if the students were suspended from crosses with their arms outstretched in the traditional manner depicted in Christian art, they experienced no problems breathing. Thus the often quoted theory that death on the cross is the result of asphyxiation is no longer tenable if the arms are outstretched. 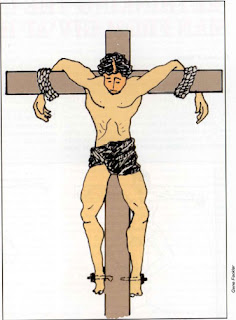 According to the physiological response of the students, which was closely monitored by Zugibe, death in this manner is the result of the victim going into hypovolemic shock. Death is this manner can be in, a manner of hours, or days depending on the manner in which the victim is affixed to the cross. If the victim is crucified with a small seat, a sedile, affixed to the uptight for minimum support in the region of the buttocks, death can be prolonged for hours and days. In fact, Josephus reports that three friends of his were being crucified in Thecoa by the Romans who, upon intervention by Josephus to Titus were removed from the crosses and with medical care one survived.


If, however, the victims are tied with their hands extended over their heads and left hanging, death can occur within an hour or, in minutes if the victims legs are nailed so that he cannot use his arms to elevate the body to exhale. For exhaling to occur in a normal manner two sets of muscles are needed, the diaphragm and. the intercostalis muscles between the ribs. With the victims being suspended by their arms directly over their heads, these sets of muscles cannot function properly which results in the victims inability to exhale and results in asphyxiation. Eyewitness accounts by prisoners of war in Dachau during WWII reported that victims suspended from beams by their wrist, which were tied, expired within ten minutes if their feet were weighted or tied down and within one hour if their feet were unweighted and the victim was able to raise and lower himself to permit respiration. Death in this manner, which is one form of crucifixion, was the result of suffocation.

As a deterrent in the ancient world, many of its victims were crucified where the criminal event took place as was the case with thieves or along the cities busiest thoroughfares. The situation can perhaps best be summed up by Quintilian who wrote that, "whenever we crucify the guilty, the most, crowded roads are chosen, where most people can see and be moved by this fear. For penalties relate not so much to retribution as to their exemplary effect."

As one of the main objectives of this cruel method of execution was its deterrent value, Roman authorities also devised various means whereby the victim could remain on the cross for days in public before eventually expiring. Thus the manner in which the victims were crucified was not fixed by law but appears dependent on the number of individuals involved, the sadistic ingenuity of those carrying out the execution and the time needed for this spectacle to have its maximum deterrent effect.

Giving the victim a proper burial following death on the cross, during the Roman period was rare and in most cases simply not permitted in order to continue the humiliation. Thus the victim was in many cases simply thrown on the garbage dump of the city or left on the cross as food for wild beasts and birds of prey."

Although Mr. Zias has provided information on the variety of ways someone may be crucified, we know that Jesus received the nails.  In Luke 24:39, Jesus appears to the disciples after He had risen from the dead and says, "Look at my hands and my feet.  It is I myself!"  Why would he draw attention specifically to His hands and feet if that were of no importance to belief in how He had just died days before.  Also, in John 20:24-28 Jesus deals with Thomas' unbelief.  In verse 26 it says, "But he [Thomas] said to them, 'Unless I see the nail marks in his hands and put my finger where the nails were, and put my hand into his side, I will not believe it.'"   A verse later, "Then he [Jesus] said to Thomas 'Put your finger here; see my hands.  Reach out your hand and put it into my side.  Stop doubting and believe.' "

So, Jesus was crucified with nails probably the size and shape of a railroad spike.  In addition, these nails had to be strategically placed to produce the most suffering (according to Roman aggression) and fulfill prophecy - no bone broken. 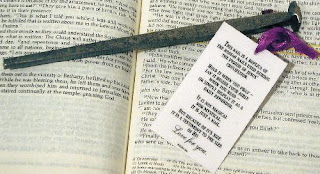 Again, Mr. Zias aides us with a display and description of someone who actually was crucified with a nail in the feet.

"In 1968 building contractors working in a suburb north of Jerusalem accidentally uncovered a Jewish tomb dated to the first century after the death of Christ.  Lying in a Jewish ossuary bearing the Hebrew inscription 'Jehohanan the son of HGQWL' were the skeletal remains of a man in his twenties, who had been crucified. The evidence for this was based on the right calcaneum (heel bone) of the individual, pierced by an iron nail 11.5 cms. in length. The nail penetrated the lateral surface of the bone emerging on the middle of the surface in which the tip of the nail had become bent. The bending of the tip of the nail upon itself suggests that after the nail penetrated the tree or the upright it may have struck a knot in the wood thereby making it difficult to remove from the heel when the victim was taken from the cross. 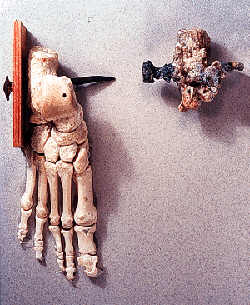 This might be the way Jesus was crucified in His feet - on either side of the vertical cross beam, so as to fulfill the prophecy that no bone would be broken.  Clearly, if a railroad spike type nail goes through the top of the foot there is a good chance the bone is going to shatter.  Another entry point could have been between the Achilles tendon and the ankle bone at the back of the foot.

The nails in the hands had to have entered between the two wrist bones - the Radius and the Ulna bones. 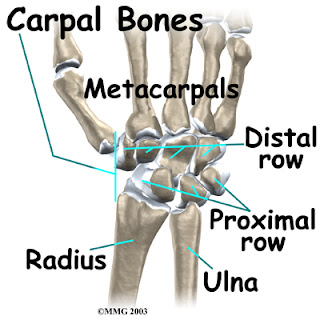 If the railroad-spike-like nail had entered into the palm area of the hand, the hand bones would have been broken from the hammering first of all.  Second, the body weight from hanging on the cross would have torn Jesus off the cross when He gave up the ghost.  Thirdly, I have heard it taught that the Romans considered the wrist, where they placed the nail, as part of the hand.  One source I have seen documented on this is - Davis CT: The crucifixion of Jesus: The passion of Christ from a medical point of view. Ariz Med 1965;22:183-187.  And yet one more source is - Barbet P: A Doctor at Calvary: The Passion of Out Lold Jesus Christ as Described by a Surgeon, Earl of Wicklow (trans) Garden City, NY, Doubleday Image Books 1953, pp 12-18 37-147, 159-175, 187-208. 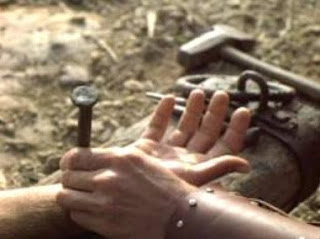 So, the picture we have is of Jesus crucified with a nail through each wrist, between the Radius and Ulna bones.  Then we have an image of two nails used to keep each foot to each side of the vertical beam of the cross.
If there was any part of this equation (the hands or feet) that I would give a little "wiggle room" to - it would be the feet.  From looking at our feet from a top-down view, if a nail missed the long toe bones, I could concede the feet nailed from above.  But so much packed into such a small area and Romans not caring what they hit, I'll stick with a sideways approach of some sort - whether it be through the heel bone or Achilles Heel area. 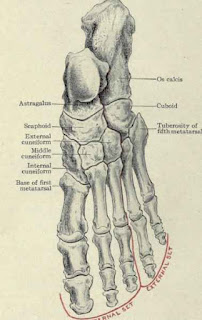 Knowing that prophecy was fulfilled on so many levels before, during, and after the trial, flogging, crucifixion, and resurrection of Jesus Christ thrills my spirit.  However, some individuals are going to read this and disregard the details and go straight to the overall picture - the salvation of the world.  But I challenge those personality types to NOT do that here or ANYMORE, but start examining the details.  There is an old saying that "the devil is in the details", but it is PAINFULLY Clear that in this situation, in the story of our salvation and in particular the crucifixion - God is in the details!  He said not one bone would be broken for a reason - that it would come to pass and it did.  To understand how God orchestrated cultures so that this method would be used to kill The Savior is not a study in vain.  There is richness and satisfaction beyond words when one digs a little deeper.  I found this to be true as I wrote this.  My heart and spirit were moved at the same time my brain was stimulated.  He is in control of the smallest details as well as the overall picture, don't overlook those details they are great nuggets of truth to examine.