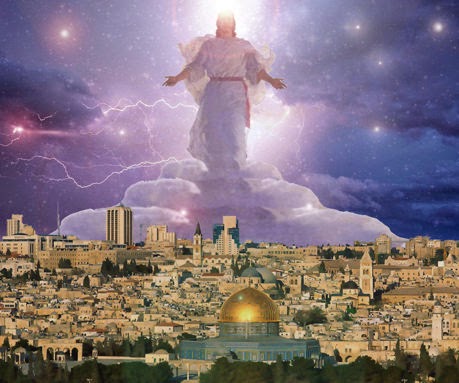 A day of the LORD is coming when your plunder will be divided among you. I will gather all the nations to Jerusalem to fight against it; the city will be captured, the houses ransacked, and the women raped. Half of the city will go into exile, but the rest of the people will not be taken from the city. Then the LORD will go out and fight against those nations, as he fights in the day of battle.

On that day his feet will stand on the Mount of Olives, east of Jerusalem, and the Mount of Olives will be split in two from east to west, forming a great valley, with half of the mountain moving north and half moving south. You will flee by my mountain valley, for it will extend to Azel. You will flee as you fled from the earthquake in the days of Uzziah king of Judah. Then the LORD my God will come, and all the holy ones with him.

On that day there will be no light, no cold or frost. It will be a unique day, without daytime or nighttime--a day known to the LORD. When evening comes, there will be light.

On that day living water will flow out from Jerusalem, half to the eastern sea and half to the western sea, in summer and in winter. The LORD will be king over the whole earth.

On that day there will be one LORD, and his name the only name. The whole land, from Geba to Rimmon, south of Jerusalem, will become like the Arabah. But Jerusalem will be raised up and remain in its place, from the Benjamin Gate to the site of the First Gate, to the Corner Gate, and from the Tower of Hananel to the royal winepresses. It will be inhabited; never again will it be destroyed. Jerusalem will be secure.

This is the plague with which the LORD will strike all the nations that fought against Jerusalem: Their flesh will rot while they are still standing on their feet, their eyes will rot in their sockets, and their tongues will rot in their mouths. On that day men will be stricken by the LORD with great panic. Each man will seize the hand of another, and they will attack each other. Judah too will fight at Jerusalem. The wealth of all the surrounding nations will be collected--great quantities of gold and silver and clothing. A similar plague will strike the horses and mules, the camels and donkeys, and all the animals in those camps.

On that day HOLY TO THE LORD will be inscribed on the bells of the horses, and the cooking pots in the LORD's house will be like the sacred bowls in front of the altar. Every pot in Jerusalem and Judah will be holy to the LORD Almighty, and all who come to sacrifice will take some of the pots and cook in them. And on that day there will no longer be a Canaanite in the house of the LORD Almighty. (Zechariah 14)

"Once again men and women of ripe old age will sit in the streets of Jerusalem, each with cane in hand because of his age. The city streets will be filled with boys and girls playing there." (Zechariah 8: 4-5)

"I will save my people from the countries of the east and the west. I will bring them back to live in Jerusalem; they will be my people, and I will be faithful and righteous to them as their God." (Zechariah 8: 7-8)

"The seed will grow well, the vine will yield its fruit, the ground will produce its crops, and the heavens will drop their dew. I will give all these things as an inheritance to the remnant of this people. (Zechariah 8: 12)

As you have been an object of cursing among the nations, O Judah and Israel, so will I save you, and you will be a blessing. Do not be afraid, but let your hands be strong." (Zechariah 8: 13)

"Many peoples and the inhabitants of many cities will yet come, and the inhabitants of one city will go to another and say, 'Let us go at once to entreat the LORD and seek the LORD Almighty. I myself am going.' And many peoples and powerful nations will come to Jerusalem to seek the LORD Almighty and to entreat him. In those days ten men from all languages and nations will take firm hold of one Jew by the hem of his robe and say, 'Let us go with you, because we have heard that God is with you.' " (Zechariah 8:20-23)
Email Post