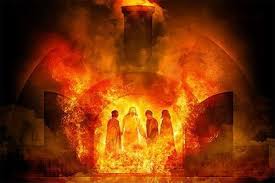 Isaiah 43:1-2 was originally written for Israel. However, when I personalize this passage, when I spiritualize it for me - there is a message for me there right now, just as I am sure it meant much to the Israelites at the moment it was spoken.

Right off the bat it is wonderful to hear a personal being, not some star dust "created" me. Even better, God took the time and energy to "form" every part of me physically, mentally and spiritually. If I could, I would render this verse - But now, this is what the Lord says to he who created you, Chadwick Evan, to he who formed you Warrior of God.

The next few lines get even better. The Lord tells me...
not to fear, because
I can hear 1 Peter 2:9 ringing in my ear - "But you are a chosen people, a royal priesthood, a holy nation, God’s special possession, that you may declare the praises of him who called you out of darkness into his wonderful light."

The next few lines God tells me what He will do when life-difficulties are equated to the images God portrays.

The first illustration God gives of a life-difficulty is passing through waters - "When you pass through the waters,". God's reassurance is - "I will be with you;".

The second picture is not just passing through mere waters, but "rivers" of life-difficulty. God's promise is "they will not sweep over you." This reminds me of Mark 4:35-41. Jesus was with His disciples, traveling on a boat when a bad storm came up. It was so bad waves broke over the boat, so that it was nearly swamped. Jesus got up from His nap, rebuked the wind and waves and they were amazed. However God does it, believe the waves of water and rivers of water in life will not sweep over you because you and Jesus are in the same boat.

The third and final portrayal of life-difficulty is that of "fire". Interesting the dichotomy between water and fire. God says, "When you walk through the fire, you will not be burned; the flames will not set you ablaze."

This last depiction of life-difficulty reminds me of the three Hebrew men - Shadrach, Meshach, and Abednego - who refused to worship the king's golden image of himself and were therefore thrown into the fiery furnace. But God saved them to the point that not even the smell of smoke was on their clothes. That is how I see and apply - "you will not be burned; the flames will not set you ablaze."

Again, I know this was originally recorded as spoken to Israel. However, when I personalize the message, God's points are very realistic and encouraging. My hope for you is that you see it that way too - Isaiah 43:1-2.

*Thanks to my loving wife for sharing this verse to encourage me in The Faith.
Email Post