WHAT HAS MADE THE DIFFERENCE 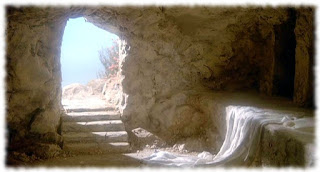 I thank God for Jesus and the price He paid before and during the crucifixion. Hebrews 9:22 declares "without the shedding of blood there is no forgiveness". However, if there was no resurrection, then The Cross was just a good cause and we still have a dead, self-proclaimed messiah with empty promises. Paul in his first letter to the believers at Corinth said it like this -

Newsflash: The Tomb is Empty! Jesus has taken back His life! (John 10:18) He is Risen! The stone was rolled back for our benefit - that we may see and believe Christ took back His life and walked out of the tomb. Paul continues in this same chapter and states - "But Christ has indeed been raised from the dead, the firstfruits of those who have fallen asleep. For since death came through a man, the resurrection of the dead comes also through a man. For as in Adam all die, so in Christ all will be made alive." (1 Cor. 15:20-22) Hallelujah to the Risen Savior - Christ Jesus, The Lord!

This is what Christians celebrate every Sunday, not just Easter Sunday - The Risen Savior! Believers join with the saints that have gone before and rejoice that The Resurrection was not only witnessed by those closest to Jesus, but by many more. In the first part of this chapter, the Holy Spirit, through Paul, thought it important enough to mention a number that was exceeded in seeing Jesus alive -

"he was raised on the third day according to the Scriptures, and that he appeared to Cephas, and then to the Twelve. After that, he appeared to more than five hundred of the brothers and sisters at the same time, most of whom are still living, though some have fallen asleep." (1 Cor. 15:4-6)

So, at least 512 people saw Christ after His resurrection. The original word for "appeared" is optanomai. It means to appear or show self. This revealing of His resurrected body and to so many people is an encouraging beginning to the period of Grace by Faith we currently enjoy. Were His appearing just to a handful, The Resurrection might have been pushed aside more easily. However, I would venture the majority of these 500+ gave their lives for the spreading of the Good News that Jesus of Nazareth had indeed died for everyone's mistakes and had conquered death, Hell and rose from the grave.

We know the Apostles laid down their lives for this mission. Josh and Sean McDowell support this by stating - "It would be hard to find a group of men anywhere in history who would die for a lie if they knew it was a lie." (Chapter 7, More Than A Carpenter)  The McDowells go on to quote Michael Green, principal of St. John's College in Nottingham, that the resurrection - "was the belief that turned heart-broken followers of a crucified rabbi into courageous witnesses and martyrs of the early church. . . You could imprison them, flog them, kill them, but you could not make them deny their conviction that on the third day he rose again.‟”

Romans 5:7 says,  "Very rarely will anyone die for a righteous person, though for a good person someone might possibly dare to die." Jesus is always righteous or in right standing with Father God. (Prov. 21:12; Isa. 24:16; Acts 3:14, 7:52, 22:14). Jesus is the ultimate good person (Mk. 10:18; Luke 18:19). While Jesus was here nobody took a blade for Him, nobody jumped in front of a spear for Him -- so-to-speak. He was healing diseases, rebuking demons, raising the dead, feeding 5,000 people, walking on water and calming the weather - what more do you need displayed to make the whole sacrifice for The Messiah?

The verses that sandwich the above verse - Romans 5:6 and 5:8 emphatically state that God's perfect timing of love shown through Christ was displayed while all humanity was locked in their fallen nature, not while we were at any point good. Romans 5:6 states - "You see, at just the right time, when we were still powerless, Christ died for the ungodly." Romans 5:8 re-emphasizes this by saying - "But God demonstrates his own love for us in this: While we were still sinners, Christ died for us." And in the middle - a verse about recognizing righteousness and goodness in your midst to the point of dying for it or him or her. Christ would unveil everything, including His person, after His resurrection and His resurrection and revelation unto many is What Has Made The Difference.
Email Post