WORTHY OF WORSHIP AND COMMUNION 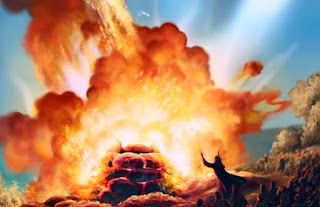 In the Old Testament there are many foreshadows to Christ and His sacrifice for us. Some foreshadows are obvious but others have to be read just at the right time for the perspective to leap off the page and deliver the Ah-Ha moment. Now observe the parallelism I noticed to Christ's Sacrifice as the writer of 1 Kings describes what Elijah did in preparation and execution of the sacrifice before the prophets of baal on Mount Carmel.

"Then Elijah said to all the people, “Come here to me.” They came to him, and he repaired the altar of the Lord, which had been torn down." [Indicative of Christ driving out the robbers, buyers and sellers from The Temple and making it a House of Prayer once again.]

"Elijah took twelve stones, one for each of the tribes descended from Jacob, to whom the word of the Lord had come, saying, 'Your name shall be Israel.' With the stones he built an altar in the name of the Lord, and he dug a trench around it large enough to hold two seahs of seed." [A picture of the Passover with the Lord's Disciples in the Upper Room as He spends His final, quality time with His Core group.]

"He arranged the wood, cut the bull into pieces and laid it on the wood." [Jesus made The Tree He would die on. The Word of God was made flesh in Christ Jesus of Nazareth. Jesus laid down His life of His own free will, no one forced Him. And he picked His life up again too.]

"Then he said to them, 'Fill four large jars with water and pour it on the offering and on the wood.'” [Water was present in the form of a mighty storm at Christ's death. Water and vinegar mixed were offered to Jesus on The Cross. Water and blood flowed from the side of Jesus when His side was pierced. Water is a symbol of purification.]

'Do it a third time,' he ordered, and they did it the third time. The water ran down around the altar and even filled the trench." [The total purification or redemption of all humanity's sin would be paid for on The Cross but take three days to manifest in full with The Resurrection being the showcase victory of that payment. In addition, the number three is important in Scripture.]

"At the time of sacrifice, the prophet Elijah stepped forward and prayed: 'Lord, the God of Abraham, Isaac and Israel, let it be known today that you are God in Israel and that I am your servant and have done all these things at your command. Answer me, Lord, answer me, so these people will know that you, Lord, are God, and that you are turning their hearts back again.'” [Reminiscent of - "Father, forgive them for they know not what they do. It is Finished. Into your hands I commit my spirit."]

"Then the fire of the Lord fell and burned up the sacrifice, the wood, the stones and the soil, and also licked up the water in the trench." [Paralleled to the time Jesus surrendered His spirit to Father God.]

The Lord showed up at both sacrifices and proved HE is the ONLY GOD  - Worthy Of Worship And Communion.
Email Post