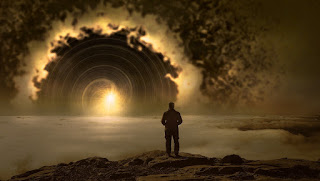 The famed physicist Stephen Hawking died today at age 76. For all his supposed intelligence, a Yahoo article pointed out -

In 2011, Hawking appeared on the Discovery Channel TV series “Curiosity,” in which he reflected on the origins of the universe and rejected the likelihood of both a God and an afterlife. (He once dismissed the latter as “a fairy story for people afraid of the dark.”) Only in confronting the finite nature of death, he said, do we appreciate the remarkable beauty of life in the present.

“There is probably no heaven, and no afterlife either,” Hawking said. “We have this one life to appreciate the grand design of the universe, and for that, I am extremely grateful.”

It is interesting Mr. Hawking gives credence to "the dark" and emotions of being "afraid" tied to "the dark" because you have to know that there is light in order to know that there is dark. Jesus left no doubt about who the Light of the World is, He said, “I am the light of the world. Whoever follows me will never walk in darkness, but will have the light of life.” (John 8:12) Darkness is not a fairy-tale. Darkness is the absence of not only physical light, but spiritual light also. And both of these - light and darkness are eternal.

There-in lies the rub for Stephen Hawking - eternity. He saw things, especially death as "finite". That is interesting - a major point of all the major faiths in the world is that there is  hope for an eternity/afterlife that is better than this present existence. In Christianity the hope of God and God on His Throne in Heaven should influence the way we live and treat others. If this is not enough, the destinations of our souls should spur us to action - Lake of Fire for those who reject Christ and New Jerusalem/New Earth for those who accept Christ. This leads me to conclude that there was no weight placed upon faith of any kind in Hawking's up-bringing. This is sad because Science is the Confirmer of a Creator or Designer.

It seems Mr. Hawking was a confused individual when it came to The Creation and transition of death. He says about the existence of Heaven and the Afterlife - "There is probably...". "Probably" is a word of doubt. There is a great truth that would have helped Mr. Hawking out if he had known it earlier - "I would rather live my life as if there is a God and die to find out there isn't, than live as if there isn't and to die to find out that there is." - Albert Camus This speaks about mainly how we live our lives now, but does address death, afterlife, God and not only the belief in the them but their reality. As a believer in Christ, I choose to live my life knowing there is a God and expecting to see, speak and dine with Him one day in the near future. The Christian finds hope and assurance in Christ's words of promise in John 14:2-3...My Father’s house has many rooms; if that were not so, would I have told you that I am going there to prepare a place for you? And if I go and prepare a place for you, I will come back and take you to be with me that you also may be where I am.

Second, Stephen says he is "grateful". Who is he grateful too? He is speaking about "this one life". So who does he credit his existence too - his mom and dad? His mom and dad did not make the human body and all the systems and cycles thereof for him to be born. God tells us in Psalms 139:13-16..."For you created my inmost being; you knit me together in my mother’s womb. I praise you because I am fearfully and wonderfully made; your works are wonderful, I know that full well. My frame was not hidden from you when I was made in the secret place, when I was woven together in the depths of the earth. Your eyes saw my unformed body; all the days ordained for me were written in your book before one of them came to be."

On the eve of this scientific thinker's death, I encourage you - there is one God, made-up mysteriously and supernaturally of three persons - Father God, Jesus Christ (Son of God) and The Holy Spirit. The lie that there is no God holds no water at all and hasn't since the beginning. James 2:19 affirms this by saying, "You believe that there is one God. Good! Even the demons believe that—and shudder." There is an afterlife too. Many testimonials confess to this fact, including Peter's revelation that - "He [Christ] was put to death in the body but made alive in the Spirit. After being made alive, he went and made proclamation to the imprisoned spirits— to those who were disobedient long ago when God waited patiently in the days of Noah while the ark was being built." (1 Peter 3:18-20)

Nobody can lie and say, "There is no God." In addition, nobody can lie and say, "Then God must not care, because of all the mess in the world." God is not causing the mess in the world, we are. Plus, we are not looking and seeking Him out for help and answers. We are kicking Him out of our lives and society. Where is this practice of "Start being the change you want to see."?

There will always be lies about God. However, the standard lies are falling in the face of truth. The decision comes down to an accepting or rejection of not only the existence of God and the afterlife, but the redemption of humanity's relationship through Christ Jesus and His promise of an awesome afterlife with Him. The Price, Christ's life, was too great for there not to be Hell To Pay for rejection of His love gift. Until we accept Christ's gift of Salvation, we are damned to a path of destruction that ends in the Lake of Fire. John 3:18 states, "whoever does not believe stands condemned already because they have not believed in the name of God’s one and only Son." So, it comes down to - will you continue your life of condemnation or take advantage of a life of freedom. What is your decision about Jesus Christ?
Email Post