A FORMIDABLE FORCE FOR HIS KINGDOM 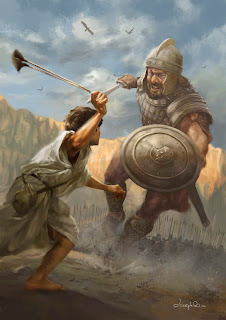 Greetings to my brothers and sisters in Christ. I encourage you today to remain in good favor with The Lord. Do everything in your power to hear His voice and obey His words. We are His children, but when we are in that position, we are His favored ones - seated together with Him in heavenly places (Eph. 2:6). Why would I warn you to stay in the righteousness of Christ or right standing with Christ? Peter helps us out here.

"Be alert and of sober mind. Your enemy the devil prowls around like a roaring lion looking for someone to devour." (1 Peter 5:8)

Several points need to magnified here. Peter says,
Our enemy, like a lion, loves to single out the weak-minded or those not in favor with the Lord to attack their mind, will, faith and spirit. I know about this. I have been in this position. But then a "David" came along and reminded me of whose I am and who I am in Christ Jesus. I sought and received forgiveness from God then proceeded to deal with my Giants with The Lord.

Like the boastful, lion-ish devil - Goliath stood before his army, the Israelite army and any spectators and defied them to come out into single man-to-man combat. Goliath knew that he had victory assured with his talent, skill, size and weaponry. So, he made the proclamation - if I win, you will be our servants, if your man defeats me, we will be your servants. Fear gripped the entire Israelite camp, including King Saul and no solider saw or knew Yahweh was right there with them.
Enter David. When David finally gets to the battlefield and all the laughter dies down and Goliath stops mocking him - David speaks.

“You come against me with sword and spear and javelin, but I come against you in the name of the Lord Almighty, the God of the armies of Israel, whom you have defied. This day the Lord will deliver you into my hands, and I’ll strike you down and cut off your head. This very day I will give the carcasses of the Philistine army to the birds and the wild animals, and the whole world will know that there is a God in Israel. All those gathered here will know that it is not by sword or spear that the Lord saves; for the battle is the Lord’s, and he will give all of you into our hands.” (1 Sam. 17:45-47)

David tells Goliath the charge against him, what the verdict is, who the verdict came from, where the real battle is being fought and who will receive the victory today. The victory manifested on the battlefield with a stone slung from David's sling to Goliath's forehead, then David's sword expertise on Goliath's neck. However, the phrase to catch here and in every battle we face against our Giants is - "This day the Lord will deliver you into my hands". David included The Lord in the battle or struggle - I come against you in the name of the Lord Almighty, the God of the armies of Israel. We always need to remember The Lord first in everything - Mountains or Molehills.

God could have taken a soldier in the Israelite army and influenced him to strip him down to the most bare essentials for battle in order for The Lord to receive the glory. But God did not do this. Instead, God selected a messianic figure - a shepherd, who knew how to protect his sheep, to come and defend Israel. Allow God to arise next to you, inside of you, in front of you and behind you and over you when you are on the battlefield of life. Alone and out of favor with God we are a prime target for the enemy, but in-step and in-tune with The Holy Spirit we are A Formidable Force For His Kingdom. 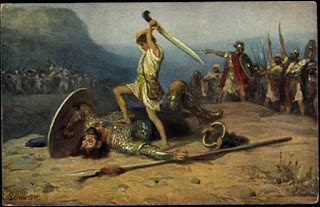