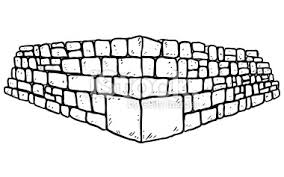 Throughout Scripture everyday analogies are given to communicate a spiritual truth. For example -

One of the analogies that I believe believers may want to stop and research is the analogy of us as Living Stones. However, let us first look at Jesus pictured as a rock or stone.

There are many references to Christ as The Rock, The Stone or The Cornerstone. In Matthew 16:18 when Jesus was talking to the little rock or Peter, I believe Jesus pointed with His finger at Himself and said, "And I tell you that you are Peter, and on this rock I will build my church, and the gates of Hades will not overcome it." Why? Because there is no other person the church is built upon than Christ Jesus. No other person does the gates of Hades wither at the name of than Christ Jesus. Peter did help build the church, but it was not built UPON him. Peter did make a great sacrifice with his life, but he did not overcome death, Hades and the grave as Jesus did. The church is built UPON Christ Jesus, The Son of the Living God.

Another reference to Jesus as a Rock is found in Daniel 2:33-35. In this passage a supernatural rock becomes a mountain that engulfs the entire earth. This prophetic literature describes the return of Jesus in a militaristic fashion when He will subdue all worldly kingdoms and set up His own for a thousand years before making things new.

Speaking of mountains, that is what rocks form. In mountains, specifically Mount Zion, we can see The Mountain or Kingdom made out of relationships at the cost of Chirst's life. God sits upon the top as King of the Mountain and He is also the Root of the Mountain. In this same way, we were placed in The Temple as stones of His House, His Kingdom and His Family. However, Christ is The Chief Cornerstone.

What makes The Chief Cornerstone different from the remaining three? The first stone set in the construction of a masonry foundation, which is analogous to our spiritual foundation, is important since all other stones will be set in reference to this stone, including the other cornerstones, thus determining the position of the entire structure.

So, where does that leave us? 1 Peter 2:4-8 brings the challenge to be "like living stones" front and center - a supportive, Christlike person with structure and character whose life and service always points to his/her Chief Cornerstone - Christ Jesus. The passage reads -

"As you come to him, the living Stone—rejected by humans but chosen by God and precious to him— you also, like living stones, are being built into a spiritual house to be a holy priesthood, offering spiritual sacrifices acceptable to God through Jesus Christ. For in Scripture it says:

'See, I lay a stone in Zion, a chosen and precious cornerstone, and the one who trusts in him will never be put to shame.'

Now to you who believe, this stone is precious. But to those who do not believe,

'The stone the builders rejected has become the cornerstone,' and, 'A stone that causes people to stumble and a rock that makes them fall.'

They stumble because they disobey the message—which is also what they were destined for."

Within this passage, Peter re-emphasized a prophecy about Christ and His opponents from David in Psalm 118:22 - "The stone the builders rejected has become the cornerstone". This would be fulfilled by the Jewish religious leaders of Christ Jesus. Rejected by "the builders", the Pharisees and Saducees took ownership of the Temple. Their positions, roles and responsibilities were too precious to them so they kept God, as The Head of His House, even in His prophetic Scripture of a coming Servant Messiah - Out!

Notice, "the builders" here are men, not God. The religious Jewish leaders proved that with the rejection in John 11:48. They said, "If we let him go on like this, everyone will believe in him, and then the Romans will come and take away both our temple and our nation." There was the concern. They said, "our temple" and not God's temple.

Then the High Priest declared and prophesied - "better for you that one man die for the people than that the whole nation perish." (John 11:50) This was the Jewish answer.

Then they waited and schemed for their prime opportunity to take Jesus of Nazareth out of the picture. "So from that day on they plotted to take his life." (Jn. 11:53) This became their plan.

Listen! If Christ as the Chief Cornerstone was rejected, we can be sure rejection as being part of His household is guaranteed. John remembers Jesus saying, "If they persecuted me, they will persecute you also." (John 15:20) People, inside and outside Christianity, will look for flaws in us. We must abide in Christ. We must always point back to The Cornerstone and the price paid for His prominent placement in our lives and in The Family of God.

I know we don't think much of rocks as being living or even active. On the contrary, rocks are usually active when they are acted upon by an outside force like water, wind, lava, gravity and so forth. However, believers are being called to be proactive. Notice the section - "you also, like living stones, are being built into a spiritual house...". The phrase "are being built" implies a process. Yes, Jesus Paid It All, but now sing the rest of that - All To Him I Owe. Christ has Redeemed us with His life and claimed the victory through His Resurrection. However, our part now remains to live a devoted life to Him, hopefully seeing our physical manifestation glorified soon, upon His Return.

Christ is The Creator and Sustainer of everything. Who or What is The Chief Cornerstone of your life? Who is the governing force, anchor, moral compass, peace and security in your life? I pray your answer is Christ Jesus. If He is, then alignment with Him in every facet of your life along with shoulder-to-should service with fellow believers and expected times of persecution is how we can view ourselves as - Living Stones.
Email Post