Where The Word Came From 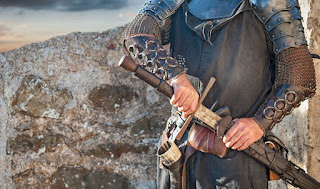 Just as a soldier of old pulls his sword from his sheath or scabbard, so does the Christian pull the revealed or quickened Word of God from the Written Word of God.

This imagery of the Armor of God on the Christian soldier is fully described in Ephesians 6:11-17. However, the specific verses of fourteen and the end of seventeen are the point of emphasis here.

Jesus is the way, truth and life. He is the Word of God who created all things and holds all things together. This "holding all things together" image can be easily seen as the Belt of Truth in the Christian's armor. The Belt of truth is the Logos or written Word of God.
The Sword of the Spirit noted as the word of God at the end of verse seventeen is translated in the original Greek as the Rhema Word of God, or revealed/quickened word of God. The Sword of the Spirit is an inspired message from The Holy Spirit that is grounded in The Bible meant to defend yourself, apply appropriately to a situation or encourage and correct another person.
However, the whole armor, especially God's written (Belt of Truth) and revealed (Sword of the Spirit) Word were deemed necessary not only for attacks against this world's issues, but also against the spiritual opposition - "For our struggle is not against flesh and blood, but against the rulers, against the authorities, against the powers of this dark world and against the spiritual forces of evil in the heavenly realms." (v.12)
My encouragement to all of the Soldiers in Christ today is to stay in The Written Word of God! As we meditate on His Logos, His purposes and promises, we will be preparing for when the time comes to do battle. One of my favorite verses in The Bible is Proverbs 15:23 - "A person finds joy in giving an apt reply— and how good is a timely word!" There will come a time when a revealed word is called for, when the Sword of the Spirit is needed, however there needs to be no question Where The Word Came From.
There is a song that declares There's Power In The Blood. And there is, there is wonder-working power in His blood, but before Christ gave His blood, during His ministry and for eternity He will always be The Word of God.
If Christ said it or had His inspired writers document it (The Bible), I desire to know His mind and heart. Why? Besides Christ loving me enough to redeem my suffering and dying on a cross and then securing my eternal victory over death, hell and the grave through His resurrection - besides that - "The Lord Almighty has sworn, “Surely, as I have planned, so it will be, and as I have purposed, so it will happen." (Isa. 14:24)
He is The Word that needs to be on our hearts and in our minds. We should desire with every strand of our being to gobble up every morsel of The Bread of Life - His words. When we are filled-up with His words, God is able to use us to make Him known by having Christ in us, the hope of glory (Colossians 1:27).
Email Post