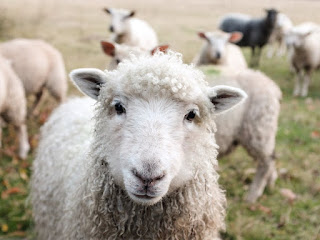 Even though we are more than sheep to God, thank God for His rod and His staff for they comfort me (Ps. 23:4). What is so comforting about a rod and a staff - nothing at first glance. The comfort comes in whose hands those sticks reside. Anybody else who has authority over me with disciplinary and protective powers I will always question and pray over. But those two traits, discipline and protection, in the care of Jesus, administers peace and love to the believer on their journey with Christ.

Even though both sticks can be used to strike someone or something, the shepherd mainly used the rod for protecting the fold. The staff, the stick with a hook at the end was used for protective measures as in snatching sheep away from danger or gently hooking them back into the fold.

In Revelation 3:19, Christ says, "Those whom I love I rebuke and discipline." Notice what Christ did not say. He did not say, He would leave us or abandon us when we mess up, get in danger or outside forces threaten us. Hebrews 13:5 attests to the very opposite.

I think "rebuke" is often misunderstood for "forsake". There is a mindset I have witnessed many times where if one is corrected or told that their actions, thoughts or words were wrong then all was lost for them. This is a tragic deception. A rebuke is caring by someone enough to tell you something is wrong so you can take the necessary steps to change. The delivery of the rebuke needs to be considered, but the nature of it is still in the good interest of the incorrect.

Disciplining from God involves consequences for our actions, especially if we continue in our stubborn ways. However, disciplining also has a positive side in that God helps us set good, Godly habits to avoid sinful pitfalls. The Lord knows I am so grateful for being more than sheep. Plus, I am eternally thankful He is known to all Christians as The Great Shepherd because many, many times I can be Dumb As Sheep.