His Lordship And Authority 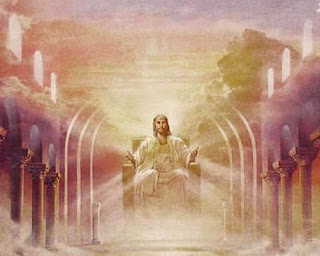 All that is in lordship or authority over our lives should always be from God. If our thoughts, actions and words do not have their source in God then that void is filled with something or somebody else that should not be there.

"If people reject the Lord's authority over their lives and if God is no longer God in their lives, then they must find anothr god! It is impossible for the human spirit to thrive without something to live for, something larger than itself -- and that something is what a god is!" (Ray Stedman, God's Final Word: Understanding Revelation, 58)

In the absence of trust in God's lordship in someone's life, the major, remaining choices for authority that will govern the individual are - your own, the world's or Satan's.

The devil's plan or authority over anybody's life is filled with lies for he is the Father of Lies (John 8:44).Therefore, he cannot be trusted.

The world's plan or authority contains too many empty promises with a track record of just enough systems to make you think they care about you but only care about their temporary power and remaining in it. Therefore, the world cannot be trusted.

You, as the sole deviser of the plan and authority in life take a high risk when you just depend upon your inexperienced self and the extreme limited knowledge you possess instead of surrendering your plans and dreams to God and consulting Him in daily prayer about them.

None of these options - us, the world and/or Satan - can touch the all-knowingness and loving-kindness of God in Christ Jesus. I never said it would be easy and neither did Christ. Jesus said, "In this world you will have trouble. But take heart! I have overcome the world." (John 16:33)

That statment is a pretty huge selling point to me for unbelievers searching for a faith or authority to direct their lives daily. Even moreso is observing and trusting Christ's life as our example. With The Plan of Salvation upon His life He endured many different obstacles that challenged it and Him, but still prevailed because of the authority in His life and the plan He did not deviate from.
Some people felt like trying to kill Jesus. Many did not want to rock the Roman Boat. Others, like the religious leaders of that day did not want to lose their position to the likes of a Nazarine carpenter claiming to be the Jewish Messiah. But every attempt on His life failed because Christ knew the authority in His life and the design upon it (Jn. 7:30; 43-44; 8:59; 9:22; 10:31; 10:39; 11:53).

Other groups of people wanted Jesus alive and desired him to be seated as King immediately as they were willing to forcibly make Him so. However, this did not align with Father God's plan for Him and He trusted in the Father's lordship and plan as He "withdrew again to a mountain by Himself."
Jesus addressed both concerns. To the one's trying to kill Him, He said,
To the ones wanting to make Him King or know when His rule was going to manifest, Jesus said,
Jesus said,
I challenge you, as well as myself, to not panic when life and the world seems out of control. When we have God as the authority in our lives, questioning the Lord about anything, especially situations concerning alignment with Him is not wrong or out of order. Jesus says, "Ask...seek...and knock" for answers (Matt. 7:7). This calls for a daily active investment within our relationship with God. Panic is not an appropriate response when in a sound relationship with God.
Knowing that The Plan was completed ("It is finished" - John 19:30) and perfectly timed for Jesus, how much more will God take care of His children. Choose to discard all other options (ourselves, the world and the devil) and believe in Christ's sovereignty for your life. Trusting and praying into a deeper revelation of God's plan and purposes will manifest a surrendered life to His Lorship And Authority.
Email Post