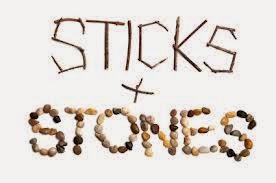 "Sticks and stones may/will break my bones but words/names will never hurt/harm me."

However you choose to say this, the phrase has been spoken as a defense mechanism against antagonists, such as school bullies, throughout many years. Does the slogan or mantra work? Possibly for some. But people can be extremely cruel with their words and hateful speech that is heard repeatedly crushes the spirit and damages the psyche.

Part of the solution is to not accept, trust, or believe the words that you know to be false and to replace them with the truth. The other part of the solution is not so easy sometimes - change your environment - "Bad company corrupts good character." (1 Corinthians 15:33). Those are words for the victim of an antagonist.

Paul, through the inspiration of the Holy Spirit, had words for who seemed to be Believer Bullies. These were Christians that were still rough around the edges and needed a slap on the wrist for behavior modification.
All of what was being taught by Paul to the supposed bullies in the church at Philippi was a spirit and lifestyle of humility. Once a life is established in humility greater things can begin to flow from it. Once a community of humble people grasp this, like a local church body, cities are changed for the glory of God. In addition, a black-eye is given to the Christian's spiritual bully - Satan, also known as The Accuser of the Brothers.

This title of Satan, Accuser of the Brothers, is only true in that his accusations are aimed at the Christian's ears, minds, souls, and spirits. It is true that Satan will attempt to keep unbelievers bound in their unbelief and fear but after studying Revelation 12 I believe this fallen Accuser has no access to God's courtroom anymore.

The Woman and the Dragon

1 A great and wondrous sign appeared in heaven: a woman clothed with the sun, with the moon under her feet and a crown of twelve stars on her head. 2 She was pregnant and cried out in pain as she was about to give birth. 3 Then another sign appeared in heaven: an enormous red dragon with seven heads and ten horns and seven crowns on his heads. 4 His tail swept a third of the stars out of the sky and flung them to the earth. The dragon stood in front of the woman who was about to give birth, so that he might devour her child the moment it was born. 5 She gave birth to a son, a male child, who will rule all the nations with an iron scepter. And her child was snatched up to God and to his throne. 6 The woman fled into the desert to a place prepared for her by God, where she might be taken care of for 1,260 days. 7 And there was war in heaven. Michael and his angels fought against the dragon, and the dragon and his angels fought back. 8But he was not strong enough, and they lost their place in heaven. 9 The great dragon was hurled down--that ancient serpent called the devil, or Satan, who leads the whole world astray. He was hurled to the earth, and his angels with him. 10 Then I heard a loud voice in heaven say: "Now have come the salvation and the power and the kingdom of our God, and the authority of his Christ. For the accuser of our brothers, who accuses them before our God day and night, has been hurled down. 11 They overcame him by the blood of the Lamb and by the word of their testimony; they did not love their lives so much as to shrink from death. 12 Therefore rejoice, you heavens and you who dwell in them! But woe to the earth and the sea, because the devil has gone down to you! He is filled with fury, because he knows that his time is short." 13 When the dragonsaw that he had been hurled to the earth, he pursued the woman who had given birth to the male child. 14 The woman was given the two wings of a great eagle, so that she might fly to the place prepared for her in the desert, where she would be taken care of for a time, times and half a time, out of the serpent's reach. 15 Then from his mouth the serpent spewed water like a river, to overtake the woman and sweep her away with the torrent. 16 But the earth helped the woman by opening its mouth and swallowing the river that the dragon had spewed out of his mouth. 17 Then the dragon was enraged at the woman and went off to make war against the rest of her offspring--those who obey God's commandments and hold to the testimony of Jesus.

Revelation is known as a prophetic or futuristic book of the Bible. However, this passage above pauses to perform a time warp (if you will) and give the reader a highly symbolic, literal, and spiritual synopsis of heavenly activity and earthly activity before, during, and after the arrival of Christ Jesus on earth. The woman in this descriptive event is Israel.

In verse 10 ("...the accuser of our brothers, who accuses them before our God...") John is speaking of Satan that HAS BEEN in a role of accusation before The Throne accusing John's brothers or the Jews from Abraham until Christ's birth. The beginning of the verse says Salvation has come, Jesus has arrived. The end of the verse says Satan has been "hurled" down to earth. This makes sense with all the attempts to thwart the plan of God by personally tempting Jesus in the wilderness (Matthew 4:1-11), by personally using Peter to sway Jesus from His mission (Matthew 16:23), and by personally indwelling Judas to betray Jesus (John 13:27).

Verse 17 gives the picture and sets the tone for post defeat. From Satan's defeat that wonderful day Christ gave His life for ours and then victory was sealed with Christ's resurrection - the devil, also known as "the dragon" has been "enraged" and "went off to make war against the rest of her offspring--those who obey God's commandments and hold to the testimony of Jesus.", which are True Believers in Christ Jesus. 1 Peter 5:8 supports this by stating - "Your enemy the devil prowls around like a roaring lion looking for someone to devour."

So it would be no surprise that Satan has no time for a court-case that has "It Is Finished" stamped all over it. He has no time to even try to access an audience with God to accuse us before Him. And he definitely has no time - literally - because Revelation 12:12 says, "His time is short" and he knows it!

Therefore, this bully's accusations will be pointed directly at Believers. His "flaming arrows" (Ephesians 6:16) must be met with the "shield of our faith" and verbal proclamation of Christ's promises over our lives! This does wonders for our well-being, confidence, and maturity in the Lord. Plus, it gives Satan another black-eye as we say - "Sticks And Stones..."