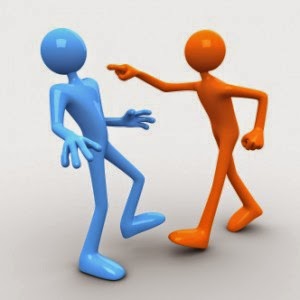 Everybody makes decisions everyday. A decision on anything is a judgement rendered, so how people can say, "Don't judge" is beyond me. Everybody is making judgement-calls all the time. Everyone is judging. Everyone is a judge. Maybe what they should really say is - "Don't condemn me." or "Don't damn me." or "Don't pre-summarize me or my situation."

The passage many love to quote from The Bible when making a point about judging is Matthew 7:1-5. The original Greek word for judge in this Scripture is krinō (kree'-no) -
The catch in all this is that people withdraw what they need from this Scripture to attack or defend others and leave the rest as letters on a page.

Let's just examine the first sentence everyone is familiar with - Jesus said, "Do not judge, or you too will be judged." Now read and hear what is not written. He said it is better not to judge but when you do judge expect the same in return. Why else would Christ even entertain the part after the coma - "or you too will be judged" - if in fact there was no possibility of us judging anyone to begin with.

As the passage continues believers are encouraged to take care of our own large, glaring matter(s) many may know about in our life ("plank in your own eye"). First, if Jesus can see "the plank" and call you a "hypocrite", then chances are others can see it too, especially when you go to critically correct or condemn another.

Notice we will still be able to administer counseling after we take care of our own house first - "the plank" -  first take the plank out of your own eye, and then you will see clearly to remove the speck from your brother's eye. So there is still a removing of the speck from your brother's eye, that has the potential of turning into a plank. However, first things first, your own speck that has turned into a plank needs tending.

So many times I see and hear people fly-off-the-handle or get out of control with their words and emotions over a judgement that was given. Sometimes that judgement was given with the best motives, but for whatever the reason many become defensive and pull out just the first verse of this passage for attack and defense purposes. Whenever a judgment is rendered toward you, consider the source, context, pray and go from there.

I still prefer to help someone knowing that they need it. If you have the answer to an issue that someone is struggling with and you can help them I would hope you at least try. James 4:17 admonishes us - Anyone, then, who knows the good he ought to do and doesn't do it, sins. Your attempt to help may come across as judging their situation, and you are because you know and have something better, but at least you can say the answer was presented to them. If they reject you, your judgement, and solution then that is on them.

So, what I read and hear Jesus telling me and the rest of us, especially Christians, is - "Don't be so fast to pass sentence on someone. However, when you do judge another, cause you will do it, even if it is to help with a "speck", try to judge yourself in the same area of judgment first, making sure your own house is in order before casting your wisdom. Then when the same measure comes around in your direction, you will not be found lacking but will have delivered Sound Judgment."
Email Post