THE GARDEN (OF CONTROL) 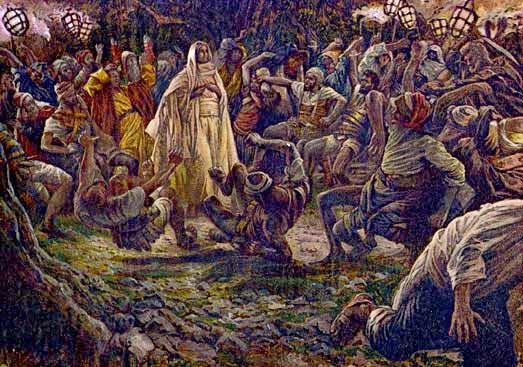 I imagine many view the events with Jesus in the Garden of Gethsemane to be an intense prayer time, the manifestation of His betrayal, and one last compassionate miracle given (healing of the servant's ear) - save the resurrection. When I follow Jesus into the Garden of Gethsemane in the Scriptures I see Jesus' submission, power, revelation, and ultimate control.

Jesus said to Pilate - “You would have no power over me if it were not given to you from above." (John 19:11) This statement was proven true just hours before in the Garden of Gethsemane when Judas led a "detachment of soldiers" (John 18:3), which equated to 600 armed Roman soldiers and the temple police, to arrest Jesus.

The decision to arrest Him, try Him, beat Him, and kill Him met a taste of power Judas had seen for three years. Jesus displayed His power to the military might, officials, and disciples gathered on the Mount of Olives that night when He answered a question.

Notice the response at the identification of Himself as "I AM". In the original Greek the phrasing for "drew back and fell to the ground" is just as you might think - a staggering knock out punch! With just these words Jesus took down a whole hillside of armed men and officials. However, something else miraculous happened - a resurrection.

The Gospel of Mark records -
According to a study by Rick Renner, some scholars have attempted to name this naked man as Mark himself. They have Mark hearing about this event in the middle of the night, getting up out of bed and running to the scene, which was a great distance away. But evidently this was a physical impossibility due to the remoteness of the location.

So, who in that day and time wears nothing but a linen garment? The dead! In fact, the only other time "linen garment" is found in Scripture is when it is used to describe the cloth Jesus' body was wrapped in after He was removed from the Cross. Jesus' self-identification not only knocked out the imposing military threat, but it raised the life of a young man in the cemetery located at the foot of the Mount of Olives. I would be following Christ too!

In another display of His power in The Garden, Jesus heals the ear of the servant of the high priest (Luke 22:49-51). According to Rick Renner's study of the original Greek in this text, Peter did not just nip the servant's ear, he lopped it off with a downward motion of his sword - apokopto. The interesting thing about this healing was that the high priest, Caiaphas, and his servant Malchus, were part of the sect called the Sadducees that did not believe in the supernatural. Knowing the rest of Malchus' story would have been interesting, especially after Jesus' resurrection.

With a military force of 600 plus on the hillside in front of Him and with correcting Peter's violent mistake by healing the servant's ear, Jesus reveals to all there -
Wow! As if one legion (6,000) would not suffice, Jesus had at His ready - "more than twelve legions". So, the least amount of legions available was twelve (72,000 angels). So, what kind of killer power is that? Well, Isaiah 37:36 says, that one angel, albeit - the angel of the Lord (the pre-incarnate Christ) took out 185, 000 men. If the angel of the Lord is the example of the rest of the Heavenly host then one legion of angels could take out 1, 110, 000, 000 (one billion, one hundred ten million men) and twelve legions could take out "twice the number of people living on the planet right now" (Renner, p.229, Sparkling Gems From the Greek).

The Garden of Gethsemane was a pivotal time and place for Jesus in His life and ministry. We get a glimpse of who is really in control with these displays of power and compassion. Let us revisit John 10:18 once more -
Notice the word I highlighted in this verse? The original Greek word is Exousia meaning permission or right. So, Jesus received from Father God the right, permission, authority and power to pick His life up from death and the grave. The price was great, but the victory was greater! In the Garden, Christ hinted at the amount of power He had to go different routes - (1) could have 72,000+ angels wipe out who He selected, (2) could have used the power of His Word to flatten His foes, or (3) could fulfill Father God's plan for salvation - The Cross and Resurrection. I am so thankful Jesus said, "Not my will, but your will be done." to Father God, because through Christ I am redeemed.

Max Lucado said it best in the title of one of his books - He Chose The Nails.