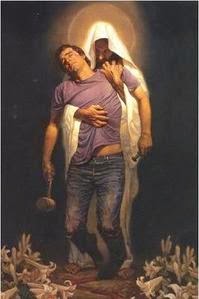 Threshing is to separate the grain/seed from the plant by a beating action. Before machines did this for us, outdoor threshing consisted usually of a circular floor made of a hard surface (stone, slate, tile, or wood) and sloped for rain water run-off. It was typically located on an elevated piece of land to catch the wind for the winnowing process. It was also community owned and operated.

Inside threshing (barn threshing) was usually located just inside a bay door on hardwood, stone or packed dirt flooring. To prevent grain/seeds from falling or blowing outside a board called the "Threshold" was placed across the entrance/exit of the doors.

"After this threshing process, the broken stalks and grain were collected and then thrown up into the air with a wooden fork-like tool called a winnowing fan. The chaff would be blown away by the wind; the short torn straw would fall some distance away, while the heavier grain would fall at the winnower's feet. The grain could then be further cleansed by sieving." (source: en.wikipedia.org/wiki/Threshing_floor)

Satan has his own threshing and sifting business. This is a spiritual industry that has been around for a long time, which has been meant to break people down until they question the need for God in their lives or outright betrayal. Judas was sifted successfully by the devil (John 13:27). Peter was a partial success - he denied Christ, but repented of his actions (Luke 22:60-62). Job was an unsuccessful attempt (Job 42). Even Satan's pursuit of Jesus' life in the wilderness was unsuccessful (Matthew 4:1-11).

A common thread that seems to be running throughout these encounters was that there was a supernatural meeting and request(s) made known in each. Notice I said a request was made - Jesus has always been Sovereign and Satan has always been subservient. In each of these lives, Satan could not perform an all-out-attack. He was relegated to ask for permission for access to their lives or use his power of temptation.

We observe with Judas the sifting was granted, because Scripture had to be fulfilled concerning the Messiah's betrayal. So, what the devil meant for harm, Jesus turned it - the betrayal - into the Salvation of all mankind. Concerning Job, I believe it was a lesson of not only trust in God as Provider, but as Job's everything. When everyone and everything is taken from you - who remains? God and hopefully a relationship with Him. With Peter, Jesus said that Satan had desired to sift ALL the Disciples, but knowing Peter was going to deny Him, He prayed for Peter's faith.
Sovereignty, intercession, and prophecy. Jesus calls out to Peter twice to get his attention and notify him that the following is important - Satan has asked to sift all of you as wheat. Can you imagine hearing that? I would be like - "Where is Satan, my Lord? How is it he has asked this of you when you have been with us the whole time?" However, Jesus moves right on from a portrayal of a secret sovereign to an intercessor - But I have prayed for you, Simon, that your faith may not fail. As if Christ's control and intercession were not enough good news, mixed with Peter's denial, Jesus prophesies a repentant life and encourages Peter to support his brothers - And when you have turned back, strengthen your brothers.

We might be about to experience something that would sift or challenge our faith to the point of apostasy in our lives. But I am writing this today to encourage you and me - that through whatever, Christ is in control, interceding on our behalf, desiring to see His plans materialize for your life because Jesus is Behind The Scenes.