HE WEARS HIS NAME WELL

Have you ever heard somebody say, "That name suits him/her."? The same could be said of Father God's only begotten Son - Christ Jesus. There are many names that Jesus has been entitled. The following poster names a few familiar ones to Christians. 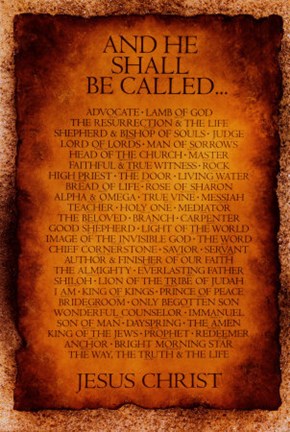 According to archaeological research and findings, Yeshua was a common name in the time of Christ. Jesus comes from the transliteration of Yeshua into Greek and then English. We observe it linked with another individual who ended up being a false prophet in Acts 13:5-7. Interestingly enough, the key to appreciating Christ's earthly name is in the prophetic.

Many prophets such as Isaiah trumpeted One Savior, first for the Jews, then for the Gentiles (rest of the world) to fulfill a plethora of beautiful and powerful titles. There could not be a committee of Yeshuas - there can be and is only one!

Many of the names given to the Savior have been fulfilled in His first visitation. Many of the others are being revealed to His followers now in their personal walks of faith. Still other prophetic titles will be manifested in the future (hopefully near future).

However, there are so many fulfillments of His character through these declared names or titles that there is no shadow of a doubt who The Savior and all other accolades refer to - Yeshua Messiah of Nazareth, but from Everlasting to Everlasting!

Personally, in my walk of faith with The Savior, I have seen Him reveal Himself as Protector, Provider, Comforter, Counselor and of course Savior to name a few. His name, Yeshua, means to deliver, save or rescue. No other person with the name Jesus or Yeshua was suited or will ever be suited for the weight of the meaning in that name. Jesus of Nazareth has added to His Name and everyone will one day bow to Him and His Name to the Glory of Father God (Philippians 2:9-11). This is why it is an understatement, but I say it anyway - He Wears His Name Well!