HE DOES NOT LEAVE US HANGING 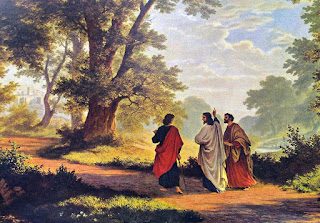 One of the main responsibilities of the Old Testament prophets was to foretell the coming of The Messiah who would deliver His people and reign on the earth over them and the entire human race. However, another responsibility was to foretell and describe the same Messiah or Savior that must come, but as a Sacrifice for those who would believe in Him by faith. Christ would come as a Servant before He arrives as the ultimate Soldier.

Even when Christ was here in the flesh, nobody was understanding in full or paying full attention to the fact that Jesus was and is The Messiah prophesied to come. We see deep into the ministry of Jesus and deep into the book of Matthew the account of when Jesus begins to announce His personal sacrifice for the salvation of all and His resurrection.

"From that time on Jesus began to explain to his disciples that he must go to Jerusalem and suffer many things at the hands of the elders, the chief priests and the teachers of the law, and that he must be killed and on the third day be raised to life." (Matthew 16:21)

Is it any wonder that confusion and doubt raise their nasty little heads here? Most of what anybody had heard about was the Military Messiah that would come to vanquish their enemies and set up a wonderful, global kingdom. But here was Jesus healing the sick, raising the dead, feeding thousands from very little, teaching them what was on Father God's heart and riding into Jerusalem on a donkey - not a warhorse.

Jesus would fulfill the prophecies about Himself and His own words to His disciples. Jesus suffered, was crucified, died and buried - but on the third day rose again from death, hell and the grave and sits at the right hand of Father God with the keys of Death and Hell in His possession.

However, the impact of these last few days of Christ's life on earth still needed to be revealed or unveiled to the disciples. This is one of the many things I love about my Savior. We may have one idea about Him or a plan for our lives and it could be correct, but not in the right order or sequence. The lovely thing is Jesus does not leave us hanging.

"Now that same day [Resurrection Day] two of them [Christ followers] were going to a village called Emmaus, about seven miles from Jerusalem. They were talking with each other about everything that had happened. As they talked and discussed these things with each other, Jesus himself came up and walked along with them; but they were kept from recognizing him.

He asked them, “What are you discussing together as you walk along?”

They stood still, their faces downcast. One of them, named Cleopas, asked him, “Are you the only one visiting Jerusalem who does not know the things that have happened there in these days?”

“What things?” he asked.

[Then the disciples described the events of the last few days.]

He said to them, “How foolish you are, and how slow to believe all that the prophets have spoken! Did not the Messiah have to suffer these things and then enter his glory?” And beginning with Moses and all the Prophets, he explained to them what was said in all the Scriptures concerning himself." (Luke 24:13-35)

However, the veil was not lifted from their understanding of who Jesus was until He broke bread with them.

Are you at a point in your life where a view or plan that was given seems near, but is not making sense? Seek the Lord. As the song says - have a little talk with Jesus. Sometimes we miss the boat on understanding. Sometimes we go purely on hearsay. Sometimes things are veiled for God's timing and purposes. So, keep in contact with Christ - pray, break spiritual bread with Him by reading His Word and talk to someone about your situation with whom you trust. You never know, the Lord may send someone else, an angel or reveal to you in a dream Himself and next steps for your life. But as you see from the example with the disciples on the Road To Emmaus - He Does Not Leave Us Hanging.
Email Post