Life is all about re-establishing relationship with God through Christ Jesus. After accepting Christ, nourishing our time with Him and responding to His Counsel on life's journey - dangers still lurk. Some believers  substitute a place, many fulfilled needs and objects for God.

There was a place called Shiloh where all of these dangers took place for the Israelites.

"At Shiloh the Israelites set up the Tabernacle—the Tent of Meeting constructed at the beginning of the wilderness journey and after forty years brought into the Promised Land (Joshua 18:1, 8-10; 21:2). According to Talmudic sources, the Ark remained at Shiloh for 369 years. Other scholars estimate anywhere between 200-400 years. The area was well suited as a quiet place for worship, surrounded by hills, pasture lands, and a water supply.

Shiloh was a city in the tribal territory of Ephraim. Judges 21:19 describes its position with exactitude:

'So they said, 'Behold, there is the yearly feast of the LORD at Shiloh, which is north of Bethel, on the east of the highway that goes up from Bethel to Shechem, and south of Lebonah.'" Judges 21:19 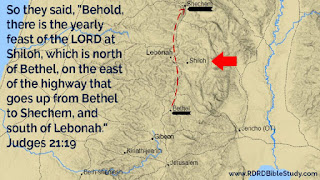 By the time of Jeremiah’s prophecies, the northern kingdom had been exiled to Assyria for well over a century. The temple had been located in Jerusalem since the time of Solomon. So why choose Shiloh for an analogy of what God will “do to Jerusalem”?

'Go now to my place that was in Shiloh, where I made my name dwell at first, and see what I did to it because of the evil of my people Israel. 13 And now, because you have done all these things, declares the LORD, and when I spoke to you persistently you did not listen, and when I called you, you did not answer, 14 therefore I will do to the house that is called by my name, and in which you trust, and to the place that I gave to you and to your fathers, as I did to Shiloh.' Jeremiah 7:12-14

(1) Shiloh is the only place outside of Jerusalem that the Bible records as having a temple that housed the Ark of the Covenant.

(2) During the time of the tabernacle’s residence at Shiloh, the people had attempted to exploit their relationship to God through the ark in order to achieve security and protection in times of political distress. Instead of an object made holy because of the presence of God, the ark became a “lucky charm” to protect the people from enemies. “Faith” was placed in a temple furnishing. Instead of faith in YHWH “who sits enthroned on the cherubim” (2 Samuel 6:2, et al), the people developed a superstitious reliance on the ark of the Lord. The defeat of foreign armies and the protection from enemies was attributed to the Ark instead of God Himself.

In this manner, Shiloh makes a perfect analogy for the temple in Jerusalem. The temple was holy because God’s presence dwelt there. But it too became a “lucky charm.” The people relied on the presence of a building instead of the presence of God. Protection from enemies and other blessings were attributed to the temple. Apart from God, the temple is only a building (cf. John 15:5).
(https://rdrdbiblestudy.com/shiloh/)

Although a place can be special, God's presence is what makes the area unique. The Tabernacle and Temples of old had their place, but today's Christian is pictured in Scripture as a Portable Temple with Ambassador responsibilities for His Kingdom.

"Do you not know that your bodies are temples of the Holy Spirit, who is in you, whom you have received from God? You are not your own;" - 1 Corinthians 6:19

"We are therefore Christ’s ambassadors, as though God were making his appeal through us. We implore you on Christ’s behalf: Be reconciled to God." - 2 Corinthians 5:20

At Shiloh, the Israelites got spoiled in asking for provision for resources and protection from enemies to the point they accredited that favor to The Ark instead of The Almighty. The Lord has a plan for meeting all your needs and those answered needs are found in the riches of the glory of Christ Jesus. Philippians 4:18 states -  "And my God will meet all your needs according to the riches of his glory in Christ Jesus." The riches of Christ's glory are infinite and always good. We must trust Him in His riches, in His infinite supply, in His goodness, in everything.

I too have observed Christians treating God like a Genie or Waiter and wearing a Cross-necklace as a lucky charm more than a sign of a relationship with The Creator. They spout off from a wishlist or menu like He was their servant and place their hope in charms, chants and the charisma of their crucifix.

There is a matter of reverence between what I have just described and the privilege believers are afforded to approach God's throne boldly and confidently (Ephesians 3:12). Even though God knows everything, we do not and He desires us to turn, lean and trust in our relationship with genuineness and respect.

That is what life is all about - a personal, intimate and trusting relationship with Christ Jesus. It is not about a place, your latest need being met or a lucky charm to depend upon. Life is about a lot of different processes that begin at birth and continue through the doorway of death. However, you will never have a process more important than your God Relationship.