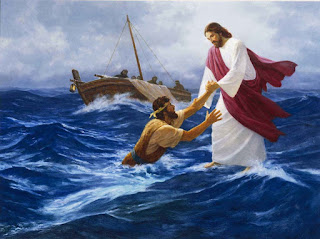 Waves are made by an underwater current influenced by the topography below the water's surface and the wind pushing on the surface of the water above. The waves are the visible result of invisible forces - the current and the wind. For sailors of any sea or ocean, knowing the the minor and major currents, winds and weather behavior is powerful knowledge. There is also power in knowing the behavior of the currents and the waves of life. However, there is One who treads those waves, can navigate the currents with us and calm the winds - He is Christ Jesus.

Two times in Scripture, actual waves were mentioned as coming against the boat full of Christ's disciples - Matthew 8 then later in Matthew 14. Matthew 8:23-27 recounts what sounds like a battle, during a boat ride, with a tempest on the water. The account records that "a furious storm" came out of nowhere and was so powerful that "the waves swept over the boat". The disciples had cause for concern. Logic screams drowning is a very real possibility here. But when they seek Jesus and His help - "Jesus was sleeping.".

Notice, He was not worried, therefore we should not be worried. This is easier said than done. However getting your eyes off the waves and on Christ, rebuking the wind and praying against the undercurrents of life take practice. That is why Paul says to be communicating with God "in every situation", especially those that bring anxiety.

"Do not be anxious about anything, but in every situation, by prayer and petition, with thanksgiving, present your requests to God." (Philippians 4:6)

He calmed the sea with His words. Jesus could have allowed the tempest to rage and kept the boat afloat to its destination, but He showed His mastery over physical waves and huge situations like this by speaking or rebuking the wind and waves.

The Disciples had heard great teaching but now they were receiving a good dose of The Messiah's power. Place yourself in their shoes at this time, I mean what kind of person has control of the weather at the mere mention of a word? - Only The Creator.

Later on in their travels, Matthew 14:22-36 records the Lord and His Disciples needed to use a boat again. This time He instructed them to go ahead of Him and He would catch up. Once again the disciples met resistance but this time the resistance was sustained - "and the boat was already a considerable distance from land, buffeted by the waves because the wind was against it."

Enough time elapsed that Jesus was able to have quiet-time with Father God on a mountainside before walking out on the lake's raging surface to meet His disciples. The disciples thought He was a ghost, which is perplexing because if the the other Boat Ride happened first, this miracle should be half-expected.

Peter stepped out of the boat upon the invitation of the reality of Christ on the water and in the midst of their dilemma. In the middle of a deep lake, on a dark night with the Lord in front of him and a boat behind him - even for a short time, Peter found himself walking on the breakers of a squall.

Peter's eyes did not look back at the boat, they did not remain on the Lord either - Peter's eyes got distracted, tempted by his impossible situation and The Doubting Voice in the Wind saying, "Did the Lord really say, 'Take courage it is I. Don't be afraid. Come."? Sounds a whole lot like the serpent in Genesis 3:1 and the devil continues to use that tactic so beware.

The undercurrents of life, the things we cannot see or immediately sense have an influence on our Life Boat. In both accounts mentioned here, the instant that Jesus was recognized in the boat or stepped into the boat - the water calmed. The Tempest with its wind, currents and waves will come after you especially if Jesus is the Captain of your ship.

The Tempest tried to take the disciples and Jesus out before their due time. But, The Sovereign Master conquered it through His Word. The Squall attempted to keep the disciples from their destination and purpose. However, The Lord turned the situation into a hiking adventure, learning experience (especially for Peter) and worship service - "And when they climbed into the boat, the wind died down. Then those who were in the boat worshiped him, saying, 'Truly you are the Son of God.'" (Matt. 14:32-33).

There is a great old hymn that has been helping me lately and Isaiah 48:17-18 supports the hymn nicely. The Scripture reads - "I am the Lord your God, who teaches you what is best for you, who directs you in the way you should go. If only you had paid attention to my commands, your peace would have been like a river, your well-being like the waves of the sea." The song/hymn is It Is Well With My Soul.

"When peace like a river attendeth my way, when sorrows like sea-billows roll. Whatever my lot, thou hath taught me to say, "It is well, it is well, with my soul."

Jesus stepped out on the tumultuous waves of the lake many years ago and taught lessons of fear not, focus and faith. He did this with just a few words and the power that is His alone as The Son of Almighty God. In the lives of the disciples then and Christ followers now, Jesus is our Wave Treader, our Wave Crusher and in the midst of all our turmoil - Our Peace. 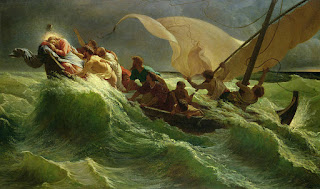