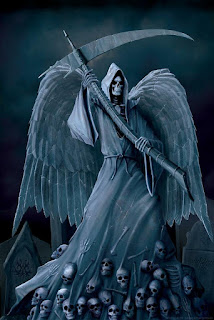 From the moment humans are born they begin to decay, they begin to move toward a physical end, for "it is appointed unto men once to die, but after this the judgment." (Hebrews 9:27)

For some, Death is something to be feared and/or dreaded for Death is considered an absolute, The End. For those physically and mentally suffering in life, Death is often viewed as a release, be it the end of all things or not.

Whether one believes Death to be The End or there to be an afterlife, Death brings a cold, hard, painful and lengthy separation. For those in the non-believing afterlife camp, memories in the here-and-now are all we have of those that have passed. For the Christian, victory by Christ over death has guaranteed victory for the believer and secured the hope that all fellow family and friend believers will be seen again.

"For we know that since Christ was raised from the dead, he cannot die again; death no longer has mastery over him." (Romans 6:9)
"For if we have been united with him in a death like his, we will certainly also be united with him in a resurrection like his." (Romans 6:5)
"Brothers and sisters, we do not want you to be uninformed about those who sleep in death, so that you do not grieve like the rest of mankind, who have no hope. For we believe that Jesus died and rose again, and so we believe that God will bring with Jesus those who have fallen asleep in him. According to the Lord’s word, we tell you that we who are still alive, who are left until the coming of the Lord, will certainly not precede those who have fallen asleep. For the Lord himself will come down from heaven, with a loud command, with the voice of the archangel and with the trumpet call of God, and the dead in Christ will rise first. After that, we who are still alive and are left will be caught up together with them in the clouds to meet the Lord in the air. And so we will be with the Lord forever. Therefore encourage one another with these words." (1 Thessalonians 4:13-18)
According to Scripture, Death is a payment that has been made by Christ for our eternal life with Him (Romans 6:16; 6:23), an enemy that has been defeated for our eternal enjoyment of His presence (1 Corinthians 15:26) and a doorway not a destruction through faith in Him.
Death is not only a tortuous process for many before the final breath is taken, but Acts 2:24 says that even within the state of being dead, death is agonizing - "But God raised him from the dead, freeing him from the agony of death, because it was impossible for death to keep its hold on him." This is why life and life more abundantly is and always has been in The Plan and will always be found in Christ Jesus. Other than Christ Jesus, there is no other faith or belief system that has their main prophet or savior dying for all the mistakes of humanity and conquering death, Hell and the grave.
"but it has now been revealed through the appearing of our Savior, Christ Jesus, who has destroyed death and has brought life and immortality to light through the gospel." (2 Timothy 1:10)
For believers and non-believers alike, Death is not the one to be concerned about. All humanity is born into a physical and spiritual death or separation. Precautions are good for preservation of life, but we worry a lot about the end of our physical life and not the end or continuation of our spiritual one in the afterlife. About this Jesus said, "Do not be afraid of those who kill the body but cannot kill the soul. Rather, be afraid of the One who can destroy both soul and body in hell." (Matthew 10:28)
Death used to be a power under the control of the devil, but since Christ's physical death and resurrection, Jesus took that power away.
"Since the children have flesh and blood, he too shared in their humanity so that by his death he might break the power of him who holds the power of death—that is, the devil—" (Hebrews 2:14)
Instead of death on a satanic leash, death is fully conquered and at Christ's disposal. According to Revelation 1:18, Jesus holds the keys of "death and Hades", who is personified in Revelation 6:8 and seen as vanquished into a Second Death in Revelation 20:14. Jesus promises if you are on Team Jesus, you will not experience this Second Death -
"Whoever has ears, let them hear what the Spirit says to the churches. The one who is victorious will not be hurt at all by the second death." (Revelation 2:11)
"Blessed and holy are those who share in the first resurrection. The second death has no power over them, but they will be priests of God and of Christ and will reign with him for a thousand years." (Revelation 20:6)
In the meantime, Christians are to live in light of this victory over death. Paul admonishes us that while we are alive, here on earth, a certain lifestyle is dead and unfruitful, while another is living and produces fruit. Paul says it like this - "The mind governed by the flesh is death, but the mind governed by the Spirit is life and peace." (Romans 8:6) So, who is governing your mind?
From our first breath we become eternal beings. Our default eternal destination was set until Christ came and supplied the choice of faith in Him as our redeeming, victorious sacrifice. Should someone not choose faith in Christ, their eternal life continues and will go through the doorway of death and end separated from God in The Lake of Fire, the Second Death. Should someone choose faith in Christ Jesus, eternal life is promised.
"For God so loved the world that he gave his one and only Son, that whoever believes in him shall not perish but have eternal life." (John 3:16)
"‘He will wipe every tear from their eyes. There will be no more death’ or mourning or crying or pain, for the old order of things has passed away." (Revelation 21:4)
Death, pictured as The Grim Reaper, does not have to be feared anymore. If my time comes before The Rapture then Christ has allowed my last breath to be taken by it. But God promises to restore both my body and spirit and the bodies and spirits of all His believers in the future. Then all will see the full manifestation of Death's death and the fulfillment of this sweet truth -
"Where, O death, is your victory? Where, O death, is your sting?" (1 Corinthians 15:55)
Email Post