LESSONS FROM HIS LETTERS (Part 4 - Thyatira) 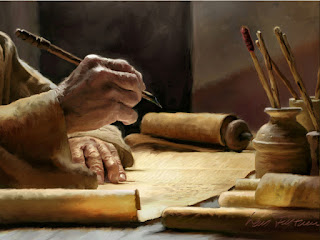 Christ Jesus is portrayed as the personally involved Judge in this letter to the believers in Thyatira. The description of Jesus in the beginning of this letter depicts Him as the ultimate judge - "Son of God, whose eyes are like blazing fire and whose feet are like burnished bronze." Not only is Jesus the perfect and righteous Judge in all matters but in this letter and the previous letter to Pergamum, Christ states personal involvement to show He does not tolerate falsehood in His church and He is the one who searches hearts and minds (Rev. 2:23).

"To the angel of the church in Thyatira write:

These are the words of the Son of God, whose eyes are like blazing fire and whose feet are like burnished bronze. I know your deeds, your love and faith, your service and perseverance, and that you are now doing more than you did at first.

Nevertheless, I have this against you: You tolerate that woman Jezebel, who calls herself a prophet. By her teaching she misleads my servants into sexual immorality and the eating of food sacrificed to idols. I have given her time to repent of her immorality, but she is unwilling. So I will cast her on a bed of suffering, and I will make those who commit adultery with her suffer intensely, unless they repent of her ways. I will strike her children dead. Then all the churches will know that I am he who searches hearts and minds, and I will repay each of you according to your deeds.

Now I say to the rest of you in Thyatira, to you who do not hold to her teaching and have not learned Satan’s so-called deep secrets, ‘I will not impose any other burden on you, except to hold on to what you have until I come.’

To the one who is victorious and does my will to the end, I will give authority over the nations— that one ‘will rule them with an iron scepter and will dash them to pieces like pottery’—just as I have received authority from my Father. I will also give that one the morning star. Whoever has ears, let them hear what the Spirit says to the churches." (Revelation 2:18-29)
After introducing Himself as this awe-inspiring, glorious, decisive judge - Jesus acknowledges, like He does with four other churches, the "deeds" of the church in Thyatira. Christ observes this church is known for its deeds, love, faith service, perseverance and that they are doing more than they did at first.
The issue is these believers tolerate a female false prophet named Jezebel. Jesus explains the wrongful teaching and the penalty for being connected with her and her teaching. Jesus reveals plainly that the teachings of Jezebel are "sexual immorality and the eating of food sacrificed to idols". In addition, Jezebel is not only an instrument of Satan by way of being a false prophet but Jesus matches her to that of a solicitor of "Satan's deep secrets" - "to you who do not hold to her teaching and have not learned Satan's so-called deep secrets,".
Christ, in His great grace and mercy, even provides a chance for Jezebel to repent, showing His compassion and just nature for and to all. But this deceitful teacher does not change her ways and Jesus does not tolerate this virus in His body so He "cast her on a bed of suffering and makes those who commit adultery with her suffer intensely, unless they repent." Plus, Christ kills the children of Jezebel for this offense and any affiliated with her by deeds will be judged according to their deeds. As you can see, God declares Himself The Judge as well as the Executioner to these believers, this Jezebel, this falsehood and personally penalizes those akin to Jezebel.
In the midst of rooting Jezebel and her teachings out of the church, era and individual, Jesus declares the challenge to the believers in Thyatira is "to hold on to what you have until I come." In other words, continue to follow the teachings and behavior I have taught you. The reward is "authority over the nations".
So, a paraphrased synopsis of this letter might read something like this -
I am the perfect and righteous judge. I know about the good you have done within the community. However, you tolerate someone and something I will not - a Satanic, female false prophet/teacher named Jezebel and her falsehood. Anybody associated with her and/or her teaching will suffer greatly and perhaps die from my hand.
Therefore, keep and treasure my ways until I come back for you. All those who are victorious or overcome in this manner will be rewarded by having authority over the nations. I will bestow upon you this power of judgement just as Father God has conferred it upon me. May the churches pay attention to what the Holy Spirit is saying to them.
Email Post