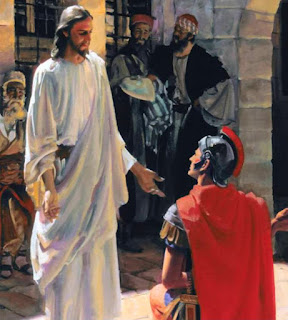 The authority of God on any matter has always been executed by God's Word. His spoken Word created the known universe. His inspired Word formed our written text, The Bible. His Rhema Word or words for the now-situations of life via the Holy Spirit are based from the written Word of God.

The Centurion of Matthew 8:5-13 that needed his servant healed knew this fact about Jesus. This commander of a hundred soldiers recognized Christ's supernatural authority, told Jesus that his home was not worthy of Christ's visit and called Jesus - Master/Lord. Authority recognized authority.

Authority has power and responsibility that carry with it a weight behind it's purpose which declares a Seal of Approval from a Higher Power. Jesus has the ultimate authority.

Authority has to come from someone greater than yourself. Even Jesus, The Word of God in flesh, said, "the Father is greater than I." (John 14:28) while visiting us the first time. This is confirmed in Philippians 2:6-8 and Hebrews 2:9.

As I have studied authority in the life of Jesus, I noticed He taught as one who had the right and jurisdiction to teach - meaning no-one else could. Said another way, what He spoke about was Right in His Ballpark.
"the crowds were amazed at his teaching, because he taught as one who had authority, and not as their teachers of the law." - Matthew 7:28-29

However, what made Jesus special to me was that not only did He display His authority with His many miracles but He proved His authority and subsequent authentic relationship with Father God through His self-sacrifice and self-resurrection.

"Then the Jews demanded of him, 'What miraculous sign can you show us to prove your authority to do all this?' Jesus answered them, 'Destroy this temple [meaning His body], and I will raise it again in three days.'" - John 2:18-19

"No one takes it [His life] from me, but I lay it down of my own accord. I have authority to lay it down and authority to take it up again. This command I received from my Father." - John 10:18

Jesus had and stills has the right, strength, power, liberty, freedom, and privilege to do anything. His authority will always be aligned with the will of God the Father.

What the Centurion requested from Jesus was something he did himself but could not transfer into the supernatural. As a commander, the Centurion had the authority to give orders to other soldiers for their immediate execution. He did not have that same authority over the paralyzing sickness his servant had, but he knew who did and how He did it - Jesus with just one word.

"When Jesus had entered Capernaum, a centurion came to him, asking for help. 'Lord,' he said, 'my servant lies at home paralyzed, suffering terribly.'

Jesus said to him, 'Shall I come and heal him?'

The centurion replied, 'Lord, I do not deserve to have you come under my roof. But just say the word, and my servant will be healed. For I myself am a man under authority, with soldiers under me. I tell this one, ‘Go,’ and he goes; and that one, ‘Come,’ and he comes. I say to my servant, ‘Do this,’ and he does it.'

When Jesus heard this, he was amazed and said to those following him, 'Truly I tell you, I have not found anyone in Israel with such great faith.'

Then Jesus said to the centurion, 'Go! Let it be done just as you believed it would.' And his servant was healed at that moment. (Matt. 8:5-13)
For whatever challenges you may be facing or your friends and family may be enduring, I encourage all of us today to seek Jesus, the one endued with All Authority and ask Him to Just Say The Word.
Email Post