A MENTAL IMAGE FOR YOU

"Just as there were many who were appalled at him-- his appearance was so disfigured beyond that of any man and his form marred beyond human likeness"--Isaiah 52:14

Let us dissect what this means because most artistic renderings of the Crucifixion of Jesus do not come close to the Scriptural description of Jesus' appearance right before He was crucified on the cross.

His back was beaten, beard pulled out, face spat upon.

Jesus was punched in the face and other places multiple times, mocked, insulted, stripped, flogged, and crowned with thorns.

The flogging was not only a whipping but a brutalizing of the flesh with the Cat of Nine Tails. 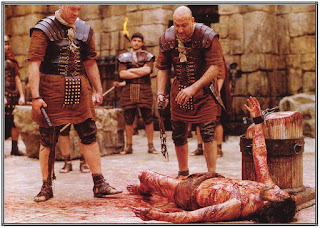 From the movie "The Passion of the Christ"

The version of the Cat of Nine Tails the Romans used had metal shards, balls, or sharp blades of some sort stuck within the woven rope or leather.  This arrangement was so that when it struck the back or front of the victim it pulled the skin off and damaged the nerves when it was retrieved.  Jesus received forty lashes.

Now with the lack of sleep from the night before plus loss of blood and all the beatings and floggings and disfigurements, Jesus had to carry His own cross-beam.  For a while He managed but then His torture caught up to Him and the soldiers required a man named Simon to carry Jesus' cross-beam.

Crucified to a cross, Jesus was covered in lacerations, bruises, swellings, dirt, sweat, spit, splinters and blood all over.

Jesus was pierced for our transgressions, He was crushed for our iniquities; the punishment that brought us peace was now upon him, and by his wounds we were healed. (Isaiah 53:5)  This, incredibly, was the will of God the Father who sent Him.

It is here, naked with a crown of thorns on His head, disfigured beyond belief, and people still hurling insults and mockeries that the real pain comes.  The sin of the world, past, present, and future hangs as a cloak on Jesus.  Father God turns His head away from every sin represented on His Son's body, mind, and soul - Jesus, the Word of God, who was with Father God in eternal past, is now - Alone.


O How He Loves You And Me!