SEEN THIS GUY? BE AWARE! 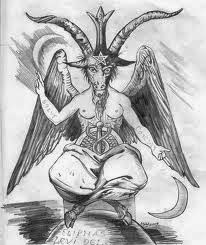 Baphomet (/ˈbæfɵmɛt/; from medieval Latin Baphometh, baffometi, Occitan Bafometz) is a term originally used to describe a dark deity supposedly worshipped by the Knights Templar, and subsequently incorporated into disparate occult and mystical traditions. It may have first appeared[1] in 11th- and 12th-century Latin and Provençal Latinisations of the name "Muhammad",[2] but later it appeared as a term for a pagan idol in trial transcripts of the Inquisition of the Knights Templar in the early 14th century.[3] The name first came into popular English usage in the 19th century, with debate and speculation on the reasons for the suppression of the Templars.[4]

Since 1856, the name Baphomet has been associated with a "Sabbatic Goat" image drawn by Eliphas Lévi,[5] which contains elements (of male and female, good and evil, etc.) representing the "sum total of the universe.[1] However, Baphomet has been connected with Satanism as well, primarily due to the adoption of its symbol by the Church of Satan.[6]

Lévi considered the Baphomet to be a depiction of the absolute in symbolic form and explicated in detail his symbolism in the drawing that served as the frontispiece:[47]

The goat on the frontispiece carries the sign of the pentagram on the forehead, with one point at the top, a symbol of light, his two hands forming the sign of occultism, the one pointing up to the white moon of Chesed, the other pointing down to the black one of Geburah. This sign expresses the perfect harmony of mercy with justice. His one arm is female, the other male like the ones of the androgyne of Khunrath, the attributes of which we had to unite with those of our goat because he is one and the same symbol. The flame of intelligence shining between his horns is the magic light of the universal balance, the image of the soul elevated above matter, as the flame, whilst being tied to matter, shines above it. The beast's head expresses the horror of the sinner, whose materially acting, solely responsible part has to bear the punishment exclusively; because the soul is insensitive according to its nature and can only suffer when it materializes. The rod standing instead of genitals symbolizes eternal life, the body covered with scales the water, the semi-circle above it the atmosphere, the feathers following above the volatile. Humanity is represented by the two breasts and the androgyne arms of this sphinx of the occult sciences.

The actual image of a goat in a downward-pointing pentagram first appeared in the 1897 book La Clef de la Magie Noire by Stanislas de Guaita.[60] It was this image that was later adopted as the official symbol—called the Sigil of Baphomet—of the Church of Satan, and continues to be used among Satanists.[6]

Baphomet, as Lévi's illustration suggests, has occasionally been portrayed as a synonym of Satan or a demon, a member of the hierarchy of Hell. Baphomet appears in that guise as a character in James Blish's The Day After Judgment[citation needed]. Christian evangelist Jack Chick claims that Baphomet is a demon worshipped by Freemasons,[61]