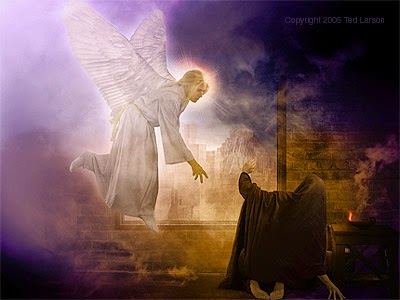 I can understand a healthy study of the Holy angels of Scripture. I should, I have sensed their presence in my life and have even written a book about them - Angels:  More Than Messengers.  However, it baffles me sometimes to see the sheer amount of fascination with angels as opposed to the Creator who created them. John, while he was on the Isle of Patmos, experienced this challenge. Twice John had to be instructed by the visiting angel not to worship him but God alone (Revelation 19:10 and 22:9). But it is not only John. I have witnessed non-Christians and Christians alike who over-emphasize the glorification of these beings in their life instead of God. "They exchanged the truth of God for a lie, and worshiped and served created things rather than the Creator--who is forever praised. Amen." (Romans 1:25)

Contact with these beings should only be one direction - them to us. Prayer is a sacred, powerful form of communication for the believer in Christ to pray to Christ, not angels. Humanity's salvation was not purchased by an angel but redeemed by Jesus Christ of Nazareth, Son of the Most High God. If Christ Jesus, the angelic Captain, Commander, and Master decides to use an angel to answer prayer, then that is His prerogative. For instance, Daniel was told twice upon angelic visitations that "As soon as you began to pray, an answer was given, which I have come to tell you,..." (Daniel 9:20-23 and 10:10-13). Notice, however, Daniel was not praying to Gabriel who visited, but to His God from whom all blessings flow! Prayer to God is fuel by which an angel moves only by the command of the Captain of the Hosts should He decide the situation warrants an angelic touch.

Before The Word of God put on flesh and became Jesus the Messiah, one of His titles was and now continues to be - Lord of Hosts. In the Old Testament, the Hebrew word for Hosts is tsaba tsebaah (tsaw-baw, tseb-aw-aw) and is found in 1 Samuel 1:3 among other places. In the New Testament, the Greek word for Hosts is sabaoth (sab-ah-owth) and is found in Romans 9:29. Both of these words mean many armies. So the phrase could be interpreted as - Master of many armies!

So, why would anyone, especially the believer in Christ, desire to contact, pray, or worship a lesser being than God? That is the question.
Email Post