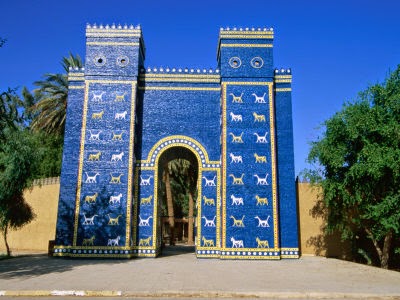 Damascus and Babylon. These two cities have their destruction highlighted in Scripture. Damascus exists today but has never been fully demolished like Isaiah foresaw.
So, however the destruction plays out, keep an eye on the news concerning Damascus.

The other city, Babylon, once existed, was slowly eradicated and is now being rebuilt. It was a literal city and is spoken of in Scripture as a literal city. "When John wants to indicate that a geographical location is symbolic, he does so clearly (Revelation 11:8). Otherwise, the geographical places in Revelation are literal: Patmos, Ephesus, Smyrna, Pergamum, Thyatira, Philadelphia, Sardis, Laodicea, and Armageddon. With this established pattern of literal interpretation for places, I believe Babylon should also be taken literally." (p. 363, The End, Mark Hitchcock) The city has a quick end forecasted.
"Isaiah 13 and Jeremiah 50-51 predicted that the city of Babylon would be destroyed suddenly and completely. Babylon was never destroyed in this way but died a long, slow death over many centuries. Since Babylon has yet to be destroyed in the way the prophets predicted, these passages must refer to a future city of Babylon that will be totally destroyed." (p.365, The End, Mark Hitchcock)
"Henry Morris highlights the advantages of Babylon as a world capital:

'Babylon is indeed a prime prospect for rebuilding, entirely apart from any prophetic intimations. Its location is the most ideal in the world for any kind of international center. Not only is it in the beautiful and fertile Tigris-Euphrates plain, but it is near some of the world's riches oil reserves. Computer studies for the Institute of Creation Research have shown, for example, that Babylon is very near the geographical center of all the earth's land masses. It is within navigable distances to the Persian Gulf and is at the crossroads of the three great continents of Europe, Asia and Africa. Thus there is no more ideal location anywhere for a world trade center, a world communications center, a world banking center, a world educational center, or especially, a world capital! The greatest historian of modern times, Arnold Toynbee, used to stress to all his readers and hearers that Babylon would be the best place in the world to build a future wold cultural metropolis." (p.364, The End, Mark Hitchcock)

'Babylon the Harlot represents the one-world religious system that rules over the religious affairs during the first half of the tribulation. She rules over the nations of the world (the many waters) fully controlling the religious affairs and has the reluctant support of the government. The headquarters of this one world religion will be the rebuilt city of Babylon, the 'mother' of idolatry, for it was here that idolatry and false religion began (Genesis 11:1-9).'" (pgs. 367-368, The End, Mark Hitchcock)

I believe Christ Jesus said He is coming back For us Before He comes back With us (John 14:2-3; 1 Thessalonians 4:13-18). I also believe that when He comes back He will save His true believers from the coming wrath, not through it (1 Thessalonians 1:10). Christ said about one part of His coming that nobody would know when He would appear to snatch believers dead and alive away to Him in mid-air (Matthew 25:13; 1 Thessalonians 5:1-2). Then Christ said all would behold Him in another coming to travel with Him and behold His victorious march into Jerusalem (Revelation 1:7; Revelation 19:14). Both of these are still future because we are not with Christ to witness His rightful seizing and ruling of the earth. Although we cannot know the day or hour of Christ's snatching away of the saints, I believe we can know the season - But you, brothers, are not in darkness so that this day should surprise you like a thief. (1 Thessalonians 5:4). And part of that season is keeping an eye and an ear open for the Tale Of Two Cities.
Email Post