WHAT HE SAID...WHAT THEY HEARD 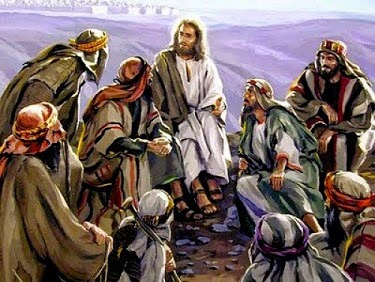 Ever played the game "Gossip"? You get a group of about ten people, place them in a circle and have one person whisper a catch phrase or simple sentence to the person to the left with no repeats. By the time the phrase travels full circle, chances are great the phrase is not as it left the original speaker.

Sometimes when we are listening, a speaker's diction can be sloppy and enunciation is needed. Other times when we are listening a word is misused in a sentence and we can receive the wrong message. Still, during other listening engagements the grammar of some individuals makes you wonder if they ever went to school at all. It is interesting what we choose to hear sometimes with or without orator issues.

Jesus spoke several times to His disciples about His upcoming betrayal, suffering, death, burial, and resurrection. However, the disciples seemed to focus on one thing and not hear the other.

Notice Peter's reaction - Peter took him aside and began to rebuke him. “Never, Lord!” he said. “This shall never happen to you!” Peter did not even come close to hearing - "and on the third day be raised to life". Being alive again would make all the difference and Peter missed it.

Yes there are some very sad elements to what Jesus said here, but the good news He shared outweighed the bad. The bad news - Jesus was going to be "delivered into the hands of men" and killed. The good news - death will not hold Him! The disciples missed it - "...the disciples were filled with grief."

So far a single disciple and the disciples plural have heard the death message loud and clear and missed the resurrection promise all together. In Matthew 20:17-28 a different reaction is recorded.

A mother tries to make the best of the situation. Maybe she understood the resurrection part here, maybe not - nobody had ever rose from the dead by themselves before - but she trusted Jesus and wanted her boys to be included in His plans for His kingdom.

Later on when Jesus predicts His death, immediately we see, in the next verse/sentence, people in place fulfilling Christ's words (Matthew 26:1-5).

Here the good news is left out, but the wheels are set in motion to fulfill His prophetic statement. Nothing is going to keep this from happening and the plotting and scheming right behind Christ's words reinforces that idea.

The last example of what the disciples heard or what they missed is located in Matthew 26:31-35. A well-known passage where Peter promises his allegiance to Christ, even in the face of death.
What I found anew when I read this Scripture this time was the very last sentence. Peter might have been the first one to voice this allegiance to death sentiment but he was not alone - "all the other disciples said the same." Peter seemed to get the brunt of the rebuke and shame since he spoke up, but all the disciples missed the good news again - "after I have risen, ..."

What is your focus on? I encourage all of us, me included, when - not if - but when challenges come our way, readjust your focus from the negative you see in the situation (like the disciples could not avoid) to God's promises. Just because we have God's promises does not mean we get a "Get Out of Situation Free" card. If we can start seeing Christ's victory more in our situations, then our journey through it will be more tolerable and we will be more teachable, amendable and useful.

One of my all-time favorite Christian singers and song-writers - Carman - wrote and sang....
"On Friday night they crucified The Lord at Calvary,
But He said, "Don't dread, in three days, I'm gonna live again, you'll see."
So, when problems try to bury you and make it hard to pray.
It may seem like Friday night, but Sunday's On The Way!"
(Sunday's On The Way)