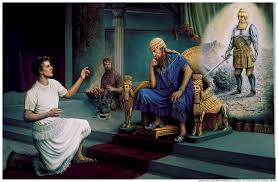 As I read the book of Daniel, I am fascinated with the themes of the steadfastness of Daniel and Company and of the prominence of God's Sovereignty. At the time the land of Judah was taken into Babylonian exile, by King Nebuchadnezzar, Daniel was a young man, physically fit, handsome, with an aptitude for every kind of learning, well informed, quick to understand and qualified to serve in the king's palace (Dan. 1:4). It is probably with many of these God-given qualities that Daniel reasoned, from Scripture - a long, challenging road lie ahead of him and his three Hebrew friends.

The fact that Daniel did not corrupt his wisdom on account of his splendor (nod to Ezekiel 28:17) is a lesson that Daniel teaches us that we can ascribe to today in our modern-day Babylon. Notice the difference between a humble vessel of God - Daniel - and an exalted, self-proclaimed king - Nebuchadnezzar.

In Daniel 2, we read of King Nebuchadnezzar's first troubling dream. It haunts him so much that he cannot sleep. The edict he decrees is a hard one - tell me my dream and then interpret it. God shows amazing favor and grants Daniel a night to sleep on it. During the night, God reveals the dream and the interpretation thereof. However, it is how Daniel presents this information to the king that is so impressive. After seeking an audience with
King Nebuchadnezzar, Daniel begins by giving credit where credit is due - to God.

"The king asked Daniel (also called Belteshazzar), “Are you able to tell me what I saw in my dream and interpret it?”

Daniel replied, “No wise man, enchanter, magician or diviner can explain to the king the mystery he has asked about, but there is a God in heaven who reveals mysteries. He has shown King Nebuchadnezzar what will happen in days to come. Your dream and the visions that passed through your mind as you were lying in bed are these:"

Daniel's steadfastness to his God and the example of it through acknowledging God's sovereignty in all things right off the bat is admirable. Now let's look at King Nebuchadnezzar's attitude and mindset.

In Daniel 4, King Nebuchadnezzar had a dream about a magnificent tree that befell (literally) hard times. The King ended up being that "tree".  A year after he had heard the interpretation of the dream - a humbling by God because he would not "acknowledge that the Most High is sovereign over the kingdoms of men and gives them to anyone He wishes." (Dan. 4:25) - the dream was fulfilled.


All this happened to King Nebuchadnezzar. Twelve months later, as the king was walking on the roof of the royal palace of Babylon, he said, “Is not this the great Babylon I have built as the royal residence, by my mighty power and for the glory of my majesty?”

Even as the words were on his lips, a voice came from heaven, “This is what is decreed for you, King Nebuchadnezzar: Your royal authority has been taken from you. You will be driven away from people and will live with the wild animals; you will eat grass like the ox. Seven times will pass by for you until you acknowledge that the Most High is sovereign over all kingdoms on earth and gives them to anyone he wishes.”

Immediately what had been said about Nebuchadnezzar was fulfilled. (Daniel 4:28-33)

God's Sovereignty, His control is seen throughout this book. However, just in these events we see that God held the revelation of the dream and the interpretation in the first account mentioned above. In the next scenario mentioned, Nebuchadnezzar learns first hand that God appoints and sets who He wills as rulers over nations. In fact, both Daniel and King Nebuchadnezzar proclaim the truth of God's Sovereignty. Daniel said, "He changes times and season, He sets up kings and deposes them." (Dan. 2:21) King Nebuchadnezzar said, "His dominion is an eternal dominion; His kingdom endures from generation to generation. All the peoples of the earth are regarded as nothing. he does as He pleases with the powers of heaven and the peoples of the earth. No one can hold back His hand or say to Him: 'What have you done?'"

In my short reading of Daniel so far, I have come away with a challenge for myself and my fellow brothers and sisters in Christ - Like Daniel, stay true to your Lord and Savior in your "Babylon" and He will show you His Sovereignty.