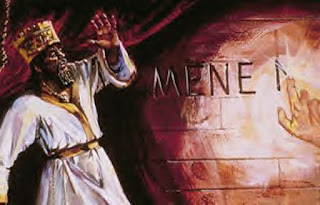 The phrase Like Father Like Son is not always a good thing. I am reading in the book of Daniel and my latest observation sees King Belshazzar making a similar mistake his father King Nebuchadnezzar made. Nebuchadnezzar was prideful and claimed all the success of his empire as his own. This led to loss of his power and position, being driven from the city and made to live like a wild animal for 7 years until he gave proper credit to Yahweh. King Nebuchadnezzar recovered with an affirmation of Yahweh's sovereignty and his kingdom and more were rewarded as a result.

The story of King Nebuchadnezzar's son, Belshazzar, had a similar beginning, boastful/prideful, but a different ending. Throwing a party for his nobles, he made the grave mistake of summoning the gold and silver goblets taken from the siege of God's temple in Jerusalem and drinking from them. But Belshazzar did one worse - "As they drank the wine, they praised the gods of gold and silver, of bronze, iron, wood and stone." (Daniel 5:4) As a result the image of a human hand appeared before the king and his guests and wrote on the wall this message - MENE MENE TEKEL PARSIN.

Mene is repeated twice for emphasis and means "God has numbered the days of your reign and brought it to an end." (Daneil 5:26)

Tekel means "you have been weighed on the scales and found wanting." (v.27)

Parsin/Peres means "your kingdom is divided and given to the Medes and Persians." (v.28)

The ending of this chapter states - "That very night Belshazzar, king of the Babylonians, was slain, and Darius the Mede took over the kingdom, at the age of sixty-two." (vv.30-31)

What alarms me is what Daniel said to King Belshazzar in explanation of the vision of the hand and writing on the wall.
Daniel told King Belshazzar about his father's humbling experience. Then Daniel told the King, he knew better than to act this way. Daniel instructs the King on what he did not do and what he did do. Daniel declared the King did not humble himself, nor "honor the God who holds in His hand your life and all your ways." Daniel proclaimed the King did "set [himself] up against the Lord of heaven" and "praised the gods of silver and gold, of bronze, iron, wood and stone, which cannot see or hear or understand."

My concern in bringing these flaws to your attention is an idea that America might be filling these same roles as King Nebuchadnezzar and his son King Belshazzar. To elaborate, I pause to consider that maybe one of our past Presidents has played the role of King Nebuchadnezzar - being prideful, having a humbling, then trusting in God. That leaves a President to fill the shoes of King Belshazzar who messed up so badly that the kingdom was immediately given and divided between the conquering forces (the silver chest and arms of Nebuchadnezzar's dream). Could our current President or next in line be that individual in which the message is given - Mene, Mene, Tekel Parsin?
Email Post