A FATHER AND HIS BOYS 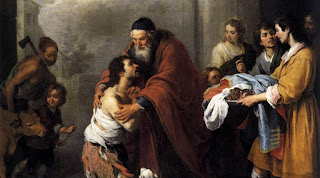 There was once a second child to a father and a younger brother to a sibling who felt he knew how to handle or manage his part of the estate. So, the younger son and brother went before the father and requested that he be given his portion at this time in his life. Without any hesitation from the father, without any fuss about his age or experience level in managing wealth, land and/or material possessions – the father divided up the land between the two sons.

The younger son/brother made a couple of bad decisions that kept him spiraling downward in life. First, at such an early age, he thought he knew how to live life. Second, he moved away from home; he moved away from the protection, provision and advice his father could easily bestow before it was time. Finally, the young man seemed to have consolidated his inheritance into currency because he then proceeded to waste all of it on a frivolous lifestyle.

Just as he went bankrupt, a famine hit the area where he was located. Life and all it's challenging scenarios happens, even to the unprepared. Immediately seeing that he was not going to be bailed out by his free money any longer, he sought employment with a local citizen to be his livestock caretaker - in particular, pigs.

The younger man had not eaten in so long because of his bad decisions and misfortunes that he considered what the pigs were eating as his next meal. Here is where he reached "the-bottom-of-the-barrel" and the only way to look was up. Common sense finally came knocking and the young man answered. He remembered that back under his father's roof the servants ate extremely well, even to the point of having some food to spare!

His situation screamed that the effort to make things right with his father would require him to lower himself below that of a son and become a servant in his father's house. However, he would have to come up with the words that convey his confession of wrong and submission of servanthood. So, he did. It all starts with recognition of the problem and movement toward the remedy. The young man had recognized his problem, now he was up and on his way back to his father's house.

He was hardly back on his father's property when his father saw him from far off and came running with arms open wide and a face beaming with a smile so big you might think his face would explode from happiness. What a sight this was to the son! Catching up with the younger son, the father bear-hugged him, kissed him and welcomed him back! Not quite what the son expected. The son, still smarting from the lesson he learned, delivered his confession and offer of servanthood. He said, "Father, I have sinned against heaven and against you. I am no longer worthy to be called your son."

Anytime a lesson is learned, a celebration is in order. However, this lesson was worth celebrating big-time! The son had not only lost focus of who was better at managing life, but he also took what he thought would get him there - wealth - and left his father. But now he had returned. He had been humbled and humbled himself before his father. The father did not enlist him in the servant's quarters. Instead, he said, "‘Quick! Bring the best robe and put it on him. Put a ring on his finger and sandals on his feet. Bring the fattened calf and kill it. Let’s have a feast and celebrate. For this son of mine was dead and is alive again; he was lost and is found.’"

The celebration began, but without the older son in attendance. Nobody invited him. He had to find out what the ruckus was about at his own house by sending a servant to investigate. Then when the older brother understood the reason for the music and dancing, that his younger brother had returned, his heart was not in the same place as his father's. He did not attend.

When the father came out to earnestly reason with him to join the celebration - the older son laid his cards on the table. He said, "‘Look! All these years I’ve been slaving for you and never disobeyed your orders. Yet you never gave me even a young goat so I could celebrate with my friends. But when this son of yours who has squandered your property with prostitutes comes home, you kill the fattened calf for him!’"

Words spoken in anger, like these, have potential to hurt or have holes or both - the older son's words had a little of both. When he said - "All these years I have been..." he was referring to the same period of time his brother had been away, magnifying his brothers mistake and magnifying his rightful stance. The words "I've been slaving for you" was an example of a phrase that has holes in it. Sure, he had worked hard for his father, but probably nothing like the very servants that serve under him and his father. The declaration "and never disobeyed your orders" has lie dripping all over it. I am sure the father could recall a time or two when an order was not obeyed by the older son, but he does not bring that into the conversation, it is not the point. The statement, "...you never gave me even a young goat so I could celebrate with my friends." reeks of a pouty attitude. It could be that the elder son never asked.

Besides word-choice, tone has a lot to do with the communication of one's thought. I don't know about you, but I can sure hear a sarcastic, accusatory tone coming from the elder son as he concludes by emphasizing a lot of "yours" in his remarks to his father. "But when this son of yours who has squandered your property with prostitutes comes home, you kill the fattened calf for him!’"

So with the tongue lashing and terrible tone that was given by the older son, the father still begins his reply to his firstborn by saying, "My son". He then continues and says, ‘you are always with me and everything I have is yours. But we had to celebrate and be glad because this brother of yours was dead and is alive again; he was lost and is found.’” In other words, you have never been lost or experienced what your brother has experienced. You have been here with me the whole time your brother was lost and had all the benefits thereof. He is your brother, you know. But now he is found and that is cause for celebration.


__________________________________
The Prodigal Son is a tale of two brothers who have lost their vision of their father, his household and all his many benefits. Sometimes Christians lose this vision. One type of son/daughter (younger version) is impatient and arrogant desiring to have all the blessings, but wants no leadership or direction - he/she wants to do the "blessed life" their way, out away from other believers and Father God.

The other type of son/daughter (elder son) has his focus on himself also. This believer has the "but what about me?" question on loop. He or she has a critical spirit, pointing out the mistake or mistakes in the other sibling, while magnifying his/her own supposed right stance in the matter. This Christian also has a bad attitude and tone to go along with those who are returning to the fold or receiving a blessing from the Lord. They somehow think that they are entitled to everything and nobody should be given second or more chances.

The elder brother could be the worse of the two. Anger, bitterness, entitlement, lying and negative attitude are all spirits that he allowed to get the better of him and quickly. These spirits are blinding. They pull a veil down over our spiritual eyes to keep us from seeing our Heavenly Father, just like they kept the elder son's focus off of his earthly father.

I pray that Christians everywhere keep their focus on The Father. As we learned from the younger sibling, we can do nothing without Him and Christ said so in John 15:5 - “I am the vine; you are the branches. If you remain in me and I in you, you will bear much fruit; apart from me you can do nothing."

Let us remember to speak to our soul as David did, brothers and sisters in Christ, and say as the elder brother should say - "Praise the Lord, my soul, and forget not all His benefits." (Psalm 103:2). This declaration places the focus back on our Father God and reminds us of His provisions or "benefits" like we have learned from A Father And His Boys.
Email Post