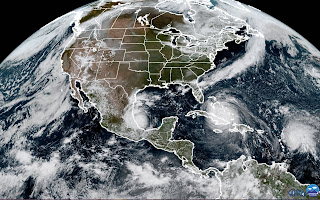 In the last week and a half North America has seen Hurricane Harvey devastate Texas with record amounts of waterfall. Hurricane Irma slam the Caribbean Islands and Florida with high winds, waves and rain. An 8.2 earthquake in Mexico came with an awesome light-show because of the friction of the rocks. Plus, fires in California, Oregon and Montana whose smoke can be seen on radar and smelt for miles is burning. There is also another two hurricanes in the water - one named Jose in the Atlantic and one named Katia in the Gulf of Mexico (https://www.popsugar.com/news/NOAA-Satellite-Image-Hurricanes-Irma-Jose-Katia-43993731).

In the meantime, we have American society doing it's best to be the Un-united or Disbanded States of America. We have a broken healthcare system, racism shouting louder "I'm still here!", a leaderless country and a country who has raised it's fist to God. If there is any judgment coming soon, and I personally believe there is, we set ourselves up for it.

In addition, the idea of having a hot-tempered, knee-jerk reaction President of the U.S. so close to the Nuclear Button is not a good condition for the safety and welfare of the citizens of America. This is especially true when you have someone of equal temperament and in an equal position in other threatening nations.

The world and followers of Christ were promised the kind of environment we have today. Luke 21:5-36 is just one major passage that does an excellent job prophesying or foretelling history beforehand. The caveat of these signs since they have been prophesied 2000+ years ago is the continued frequency and intensity of them in expectation of The Rapture for believers in Christ and The Lawless One for the world's answer.

Worldly Popcorn Events
“Nation will rise against nation, and kingdom against kingdom. There will be great earthquakes, famines and pestilences in various places, and fearful events and great signs from heaven." (verses 10-11)

Guaranteed Persecution
“But before all this, they will seize you and persecute you." (v.12)

Jerusalem's Cup of Judgment
“When you see Jerusalem being surrounded by armies, you will know that its desolation is near. Then let those who are in Judea flee to the mountains, let those in the city get out, and let those in the country not enter the city. For this is the time of punishment in fulfillment of all that has been written." (verses 20-22)

Societal and Natural Upheaval
“There will be signs in the sun, moon and stars. On the earth, nations will be in anguish and perplexity at the roaring and tossing of the sea. People will faint from terror, apprehensive of what is coming on the world, for the heavenly bodies will be shaken. At that time they will see the Son of Man coming in a cloud with power and great glory. When these things begin to take place, stand up and lift up your heads, because your redemption is drawing near.” (verses 25-28)

Just as a woman's contractions in childbirth get shorter and shorter before the child arrives, so also are the signs of Christ's coming before He arrives mid-air to take His Bride, The Church home. Meanwhile, we are told to Wait, Watch and Work.

Wait for the hope we have been believing in - the appearance of our Savior and the glorification of our bodies so we can go be with Him forever. "...we ourselves, who have the firstfruits of the Spirit, groan inwardly as we wait eagerly for our adoption to sonship, the redemption of our bodies. For in this hope we were saved." (Romans 8:23-24)

Watch for the signs in society and nature which scream louder and louder that the season of the church's Rapture is close. This is acknowledged and observed when the frequency and intensity of foretold signs are increasingly occurring. Also, watch for Christ's actual coming in mid-air. "For the Lord himself will come down from heaven, with a loud command, with the voice of the archangel and with the trumpet call of God, and the dead in Christ will rise first. After that, we who are still alive and are left will be caught up together with them in the clouds to meet the Lord in the air. And so we will be with the Lord forever." (1 Thess. 4:16-18) 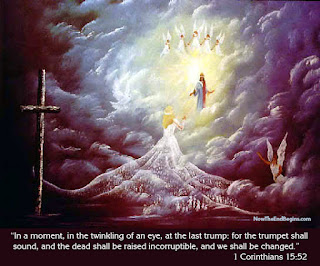 Work for the population of Paradise/Heaven and depopulation of Hell/Lake of Fire. These are real places of great consequences because a great choice made by Adam and Eve cost the Ultimate Price - Christ's life. The harvest is ready, the workers are few (Matthew 9:37). Let Christ find you busy about His business in your calling and watching for His coming when He returns. With the increase in intensity and frequency of signs that our redemption is near, I feel it will not be much longer that believers in Christ will have to anticipate the Lord's return for us. Until then we are charged to Wait, Watch and Work. 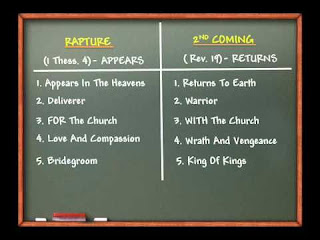