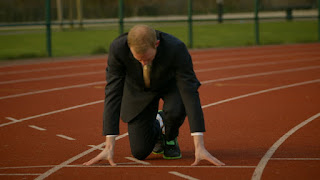 Any race, especially the year-to-year race of life, should consider the entirety. I speak of the goal-oriented planning that comes from making appropriate New Year resolutions.

Many goal-focused people have no problem in setting new resolutions every turn of the new year. However, others have a more challenging time keeping them if they even make them at all. We all know where we fall in the spectrum of goal-detailed individuals to spontaneous living people. However, this is what Scripture seems to contribute -

First, pause and consider a plan of action for your life and its consequences for the upcoming year.

“Suppose one of you wants to build a tower. Won’t you first sit down and estimate the cost to see if you have enough money to complete it? For if you lay the foundation and are not able to finish it, everyone who sees it will ridicule you, saying, ‘This person began to build and wasn’t able to finish.’

“Or suppose a king is about to go to war against another king. Won’t he first sit down and consider whether he is able with ten thousand men to oppose the one coming against him with twenty thousand? If he is not able, he will send a delegation while the other is still a long way off and will ask for terms of peace. In the same way, those of you who do not give up everything you have cannot be my disciples." (Luke 14:28-33)

Second, there is a cute, little, encouraging tune in the movie "Finding Nemo" that Dory sings, it goes, "Just keep swimming, just keep swimming." This sentiment aligns itself Biblically with how we are to continue our pursuit of goals throughout the year. Paul says in his first letter to the believers in Corinth -

"Do you not know that in a race all the runners run, but only one gets the prize? Run in such a way as to get the prize." (1 Corinthians 9:24)

This is a message of endurance. As you may have heard - life is not a sprint, it is a marathon or should be a marathon with focus on the prize. Mr. Rick Renner adds, "Success doesn't come without sustained commitment. If you are going to do better this year than you did last year, you must make a decision that by God's grace, you're going to maintain your commitment until you reach the finish line..." (p. 7, Sparkling Gems From the Greek 2)

Thirdly, your pursuits, passion, and perseverance must consume your best effort, anything less will place you in danger of losing your goals set at the beginning of the year. Like a runner in the last few yards or feet giving the rest of their attempt to win the race by increasing their speed and thrusting their chest forward at the tape - so we must leave it all on the line. Paul supports this when he wrote to the believers in Philippi -

"Brothers and sisters, I do not consider myself yet to have taken hold of it. But one thing I do: Forgetting what is behind and straining toward what is ahead, I press on toward the goal to win the prize for which God has called me heavenward in Christ Jesus." (Philippians 3:13)

You see for the good of yourself and others, running the race to just finish a race for finishing sake cannot be called a productive year. You will not benefit the same if you were to pick-up the race at the half-way mark of the year and finish either. Also, starting off strong and then fizzling out at the mid-way point or sooner would not be to your advantage. Lean on Christ and His understanding of what your goal(s) and focus should be this and every year. Know that you can do all things through Christ who strengthens you (Philippians 4:13) and before you leap off the starting blocks into your new year of opportunities - Consider The Whole Race.