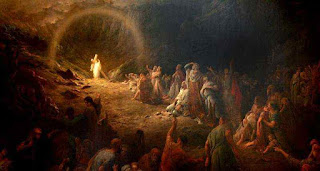 As the song goes "On a hill far away, stood an old rugged cross...", but then there was the Second Day. Those that followed Jesus were in despair because they had not grasped His words about His suffering, death and resurrection. Those that hailed Jesus as their King during His triumphal entry into Jerusalem were now disappointed in His non-militaristic approach.

Jesus had performed many miracles in their midst, even brought people back from the dead, but now The Physician has to heal Himself; the dead has to take back His life. There would be only one way that is possible - Jesus is The Christ, The Son of the Living God.

The followers of Christ new this time was coming. Jesus told them many times about His future suffering, impending death and victorious resurrection three days later. But even recognizing a major crisis and starting the initial steps to deal with it can be trumped by the agony of The Second Day.

Sometimes, our Second Day is mercifully short in length of time. Other instances prove to be so long we wonder if "this too shall pass". I believe a big key to keeping despair, fear and discouragement away is to remain busy with the Lord's work. Just because the price was paid by Jesus on the cross did not mean Christ stopped working.


Paul, in his letter to the believers in Ephesus, quotes Psalm 68:18 in describing where Jesus was and what He did in The Day In Between His death and resurrection.

"This is why it says: 'When he ascended on high, he took many captives and gave gifts to his people.'

(What does “he ascended” mean except that he also descended to the lower, earthly regions? He who descended is the very one who ascended higher than all the heavens, in order to fill the whole universe.)" - Ephesians 4:8-10

If ever we get our picture of Hades being located somewhere deep in the bowels of the earth - it is here. Looking up the original Greek for "lower, earthly regions", katoteros is the word used for "lower" and means inferior (locally, of Hades). The "earthly regions" part tell us this is an actual place beneath our feet. What was Jesus doing there? Taking captivity captive or setting the captives free. 1 Peter 3:18-20 actually gives us a mental picture of how Christ did this.

"For Christ also suffered once for sins, the righteous for the unrighteous, to bring you to God. He was put to death in the body but made alive in the Spirit. After being made alive, he went and made proclamation to the imprisoned spirits— to those who were disobedient long ago when God waited patiently in the days of Noah while the ark was being built."

Here we have a little more detail. Those who died at least from the days of Noah until Christ's days are the ones mentioned here as being ministered unto. What did He proclaim? The power of His saving blood for the redemption of all humanity - past, present and future! I can hear an imprisoned spirit saying at that moment, "How are we going to see this salvation manifested?" Then Jesus might have replied, "You will ascend with me to Paradise after I take back my life from death and the grave and show my enemies defeated." Paul and Timothy continue this in their letter to the believers in Colossae.

"When you were dead in your sins and in the uncircumcision of your flesh, God made you alive with Christ. He forgave us all our sins, having canceled the charge of our legal indebtedness, which stood against us and condemned us; he has taken it away, nailing it to the cross. And having disarmed the powers and authorities, he made a public spectacle of them, triumphing over them by the cross." - Colossians 2:13-15

"The word 'triumph' is taken from the Greek word triambeuo, which is a technical word used to describe a general or an emperor returning home from a grand victory in the enemy's territory. Specifically, the word "triumph" was used to describe the emperor's triumphal parade when he returned home.

When a returning emperor or general came striding through the gates on his big, powerful, and beautiful horse, he was accompanied by his fellow victorious warriors, who also appeared glorious after their triumphant battle. As the parade followed, the weaponry and treasures seized from the enemy's territory were grandly displayed for all to see.

The grand finale to this triumphal procession was the foreign ruler himself. This ruler had been beaten and bound in chains and was now being forced to walk in disgrace, shame, dishonor, embarrassment and humiliation as crowds of people came to celebrate his defeat and to get a 'peek' at a once-powerful but now totally defeated opponent.

So when Colossians 2:15 declares that Jesus triumphed over evil powers, it is explicitly declaring that Jesus took the enemy apart piece by piece as He thoroughly 'spoiled principalities and powers'." (p.75, Sparkling Gems from the Greek, Rick Renner)

John records Jesus said,
However, not only did Christ overcome the world, He overcame the prince of this world, Satan, his minions, death and the grave! Our enemy is the walking dead or walking defeated. Christians can have a peaceful, victorious and hopeful Day In Between. Christ has experienced it all, conquered it all and promises to be with us all - no matter what the day holds. So, much of our victory stems from our holding fast and Christ's continued work or love on The Second Day. 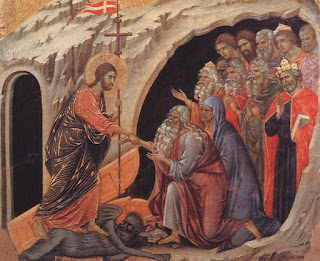