Skip to main content
Labels
Posted by NCarolinian May 29, 2020

COME AND SEE THE MAN AT THE WELL 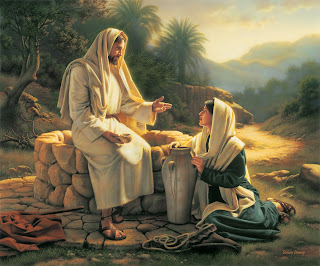 If Jesus has come to you and you have decided to follow Jesus, then let us both introduce Jesus to others. The Samaritan woman at the well reminds me of the kind of heightened joy and excitement I experienced when I accepted Christ as my Savior. Let us recall what happened when she spread that joy, excitement and her testimony.

"Many of the Samaritans from that town believed in him because of the woman’s testimony, 'He told me everything I ever did.'

So when the Samaritans came to him, they urged him to stay with them, and he stayed two days. And because of his words many more became believers.

They said to the woman, 'We no longer believe just because of what you said; now we have heard for ourselves, and we know that this man really is the Savior of the world.'" (John 4:39-42)

Wow! Cultural barriers were broken between Samaritans and Jews this day! Plus, the woman's witness was so powerful that many from the town believed in Christ based on her testimony alone.

Because of what Christ promised and the woman's testimony new believers and others sought Jesus. After urging Him to stay and teach more, Christ did not stay for a couple of moments, nor a few hours, but Jesus stayed for two whole days - "And because of his words many more became believers."

Some may already know Him, some may not, but many do not know your story - so tell them and allow them to hear your testimony first.

Afterward, tell them where they can find a meeting with The Savior - reading in His Word, in prayer, in singing worship songs and the teaching of His Word. When you can lead people to The Savior and leave them in His capable hands then we are likely to hear them say, "We no longer believe just because of what you said; now we have heard for ourselves, and we know that this man really is the Savior of the world." Just lead them to Jesus. Just Come And See The Man At The Well.