Skip to main content
Labels
Posted by NCarolinian May 08, 2020

How Do You Serve THE KING? 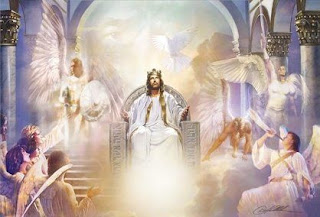 For someone who is known as Alpha and Omega, The Beginning and The End, from Everlasting to Everlasting, Faithful, True, The Good Shepherd, The Good Teacher, The Way, The Truth and The Life - for somebody who is known now by Christians and later by all as King of kings and Lord of lords (Revelation 19:16) - how do you serve THE KING who has it all?

The whole unfolding of The Great Story, for the lack of a better title, is a mystery. If one goes all the way back to when God created everything, the book of Job states that the angels were around to see the material universe formed by God (Job 38:6-7). So, with this in mind, God must have created that which we know as spiritual, first.

In my book, "Angels: More Than Messengers", I mention this as the origin of angels. In addition, I document that all angels were originally created in a holy state of being. For it was sometime later that God said about Lucifer, "You were blameless in your ways from the day you were created till wickedness was found in you." (Ezekiel 28:15) Pride was a creation and development of Lucifer. Christians and many non-Christians know this beginning, but the catch for me is God's All-Knowingness and will to still execute His Plan of History, His Plan of Salvation and His many Promises.

Before the angels were created, before time was set in motion and all the physical universe was spoke into existence - there was The King. He knew Lucifer would eventually have a pride issue that would lead to The Fall of creation and humanity. He also knew beforehand and planned beforehand to make the ultimate sacrifice for the corrupt, fallen creation and relationship that had come about from disobedience in The Garden (John 17:24; 1 Peter 1:20).

Christ Jesus has done this - fulfilled everything He said He would do up to this point in history. Just a study on all the prophecies of Christ's first visitation is enough to put you in awe of Jesus and the faithfulness of His Word. This is another major factor in - how do you serve THE KING? With confidence, knowing that because all His promises have been fulfilled and are "Yes and Amen" in Him, then what He says about the believer's future can be assured. David and Paul, Old Testament and New Testament, help in this confidence, this convincing.

Jesus knew The Plan of Salvation from the beginning and He still went through with His torture, pain, suffering and death. There is a Michael English song that goes - "There's not a crown without a cross." However, Christ, THE KING, laid His crown down and picked up the trade of carpentry for a while when He came to earth the first time for our salvation.

The excruciating suffering and pain Christ experienced in our place, for the restoration of our relationship with Father God is still unimaginable to me. But the writer of Hebrews says, "For the joy set before Him He endured the cross, scorning its shame and sat down at the right hand of the throne of God." (Hebrews 12:2) Just a verse later, there is a beautiful plea to contemplate Christ and His ways because weariness and loss of heart are sure to pose a threat. The verse reads - "Consider him who endured such opposition from sinners, so that you will not grow weary and lose heart." (Hebrews 12:3)

How do you serve someone who knows it all, has all the power and you cannot escape the presence of? My answer is - read The Great Story from beginning to end and observe His love, His justice and His faithfulness. Confidence in God's promises showcases His faithfulness upon fulfillment. Confidence is the "I told you so" to every nay-sayer of God's Word for us whether it be a personal word or grand prophecy for all of Christiandom. My answer is because Christ first loved us "Love the Lord your God with all your heart, with all your soul, with all your mind and with all of your strength." (Mark 12:30) At least to begin with, this is How To Serve THE KING.
Email Post
Labels: Godly Lifestyles