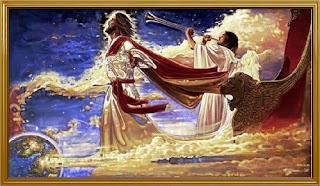 To me, there is no sound like that of the trumpet. I like all the horned instruments, but the trumpet grabs my whole being and demands my attention. The trumpet has an atmosphere of declaration or proclamation whenever its sound goes forth.

In Scripture, many times trumpets are a battle cry of the immediate demonstration of The Lord's power. Trumpets were sounded before the people shouted at Jericho and the walls fell down flat at the power of God (Joshua 6:16-20). Also, trumpets were sounded first then the jars that were in the hands of Gideon's soldiers were broken. The entire Midianite camp was thrown into disarray by the power of God at the sound of the trumpets (Judges 7:19-24).

Trumpets were used in the calling the Hebrew people to camp and to break camp to travel (Numbers 10:5, 7). Trumpets were used in Jewish festivals and there is even one called The Festival of Trumpets (Leviticus 23:23-24). Some of the most well known trumpets are those that have the judgments of God that follow them, found in the Book of Revelation.

However, there will be a certain trumpet that some songs declare Gabriel will blow, but at which the sound will finalize God's command and the archangel's words as The Lord descends to take His glorified Bride home. 1 Corinthians 15:51-54 describes this event -

When you marry this passage with 1 Thessalonians 4:16-17, you get the order of things. This passage reads -


"For the Lord himself will come down from heaven, with a loud command, with the voice of the archangel and with the trumpet call of God, and the dead in Christ will rise first. After that, we who are still alive and are left will be caught up together with them in the clouds to meet the Lord in the air."

The order then is - (1) the Lord descends from heaven with a loud command, (2) has an archangel say something, then (3) The Trumpet Call of God is sounded. Only after The Trumpet sound do we start seeing the results - the dead in Christ rising first, then those who remain being "caught up" or Raptured to meet them and Jesus in the air.

Ever heard a king or submarine captain declare an immediate law or order into action, but the law/order does not activate upon the words coming out of his mouth. There is a seconding of the declaration by the next in command - for a king, his advisor and on a submarine the captain has his executive officer. The seconding is a way of verification and agreement from the representation of the king's council or captain's crew. The sound of the trumpet is what makes the law active for the king and on a submarine you simply have the carrying out of the command after the words - "Very well then...".

With this imagery in mind, we can now picture our Lord returning for His Bride. When He descends from Heaven, I believe His command is a personal, transforming one - "Chad Pritchard, be glorified through my victory and come home!" Then perhaps the archangel echoes that command and proclaims Christ worthy to declare it. Then The Trumpet sounds and the execution of the words spoken comes into being - perishable clothes itself with imperishable and mortality with immortality. First, those who have already died in Christ go to meet Him, then we join them to be with Him forever, but it all begins with A Particular Trumpet.