THE VOICE OF GOD 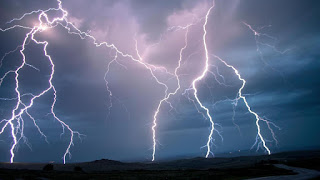 In 1 Kings 19:11-13 the voice of the Lord is described as "a still small voice" or "a whisper". However, most of the encounters with God's voice leave the recipient and the reader of God's Word quite awestruck.

When a thunderstorm arrives in my area, I will often step out on my front porch, not only to assess the severity, but to listen to the thunder and watch the lightening. I stop and imagine it as God's voice speaking to me. You might think I'm crazy or at least unsafe but observe what God said to David in Psalm 81:7  -


"In your distress you called and I rescued you, I answered you out of a thundercloud; I tested you at the waters of Meribah."

Then in John 12:29, Jesus speaks to God the Father and Father God audibly replies -

"The crowd that was there and heard it said it had thundered; others said an angel had spoken to him."

Other verses that speak to God's voice as thunderous are...

Job 37:4
"After that comes the sound of his roar; he thunders with his majestic voice. When his voice resounds, he holds nothing back."

Job 37:5
"God’s voice thunders in marvelous ways; he does great things beyond our understanding."

Psalm 18:13
"The Lord thundered from heaven; the voice of the Most High resounded."

Psalm 68:33
"...to him who rides across the highest heavens, the ancient heavens, who thunders with mighty voice."


Have you ever heard loud, powerful, window-rattling thunder? Imagine hearing the wings of an army of eagles fly overhead. Have you ever heard the crackle and sizzle of lightening as bolts attempt to find their mark? Have you ever been in the presence of a strong trumpet blast or volley of notes? Imagine yourself standing beside Niagara Falls and hearing that constant deafening roar. Have you ever been in a large crowd and just stopped and listened to the murmur of the mob? Ever wonder what the voice of God sounds like? The previous descriptive questions are Biblically based depictions of God's voice.
In addition, God's voice has been linked in Scripture to the breaking of Cedars, the shaking of the desert, the twisting of the oak, the shattering of Assyria, speaking from a cloud, and even His voice reaching the dead and they hear Him.

The following are the locations and more of the descriptions of the voice of God that were alluded to above.

"strikes with flashes of lightning" - Psalm 29:7

Heaven and earth will be shaken by His voice - Hebrews 12:29

When I was growing up, I could tell you without looking, who was walking from one room to the other and who was literally talking behind my back. All the times I have been on a team, in a job or part of a church family for an extended period of time - I knew them.

Because I shared so much time in my relationships, I could distinguish voices out from the opponents on the court as I played against another team. Because I saw them everyday at work, I knew the cadence of my coworkers from afar in the parking lot. Because I sang, worshiped, traveled and learned with my brothers and sisters in Christ, I knew their voice, cadence, heart and presence when they were around me - seen or not.

Has your name ever been called from where you cannot see the caller for the moment, but just by the voice you recognize the person? That is familiarity. That is time spent with that person. That is recognition of a bond that is close enough to have developed to that level. That is relationship.
Many of us have associated The Voice of God with a good baritone or smooth bass voice, compliments of the movies and t.v. (i.e. James Earl Jones and the like). However, if you were one of the individuals who lived during the time of Christ you actually got to hear the voice of God in human form. They heard the Word of God, the Logos, made flesh, speak. That which Father God uttered as words before creation, now was flesh and speaking. Wow! Get your mind around that!

John speaks about Christ's voice when Jesus, picturing Himself as The Great Shepherd and us as His sheep says, "My sheep listen to my voice; I know them and they follow me." (John 10:27). For the Christian today, God's Word and His Holy Spirit within the believer are how Christ mainly speaks to us. Jesus stated - "But the Advocate, the Holy Spirit, whom the Father will send in my name, will teach you all things and will remind you of everything I have said to you." (John 14:26)

The original word used for "know" in John 10:27-28 - "My sheep listen to my voice; I know them and they follow me." - is ginosko, meaning to know absolutely; be sure; to understand in a great variety of applications and with many implications. The word implies an intimate, developing relationship that God knows everything about. Jesus adds to this wonderful relationship that these same people who listen to my voice will not only have everlasting life, but the quality and/or spunk of life will be upgraded forever.

God has a magnificent voice and has used it many times to acquire the attention and obedience of nature and humanity. Where God's voice was unmistakable in the past, His voice is a matter of faith, diligence in His Word and Godly Discernment today. Especially since Christ's visitation, God's voice is built on a relationship with Jesus by accepting His sacrifice for our redemption.

When God speaks to me via His Holy Spirit now-a-days, my mind's ear hears the recall of God's Word in my own voice in a peaceful tone. However, God's voice will one day be undeniably unmistakable to all. As Jesus steps down from His throne in Heaven and pierces the thin cloak of invisibility, He will descend with "a loud command" (1 Thess. 4:16). This shout, this resounding utterance, this Voice of Thunder will be enough for all Christians to be transformed or glorified and the dead in Christ to rise first, then the remaining believers will meet them and Christ in the air to go Home.

Meanwhile, God says, if you are part of the fold, you will want to and need to stay tuned into God's frequency for discernment of all things. To help in this effort, remain a man or woman of integrity. Also, continue to pray to Him, allowing for some listening time. Permit the Holy Spirit and Word of God, when you read it, to guide you in all truth because this is His Voice. His still small voice continues to speak today even though I look forward to hearing the thunder in The Voice of God.