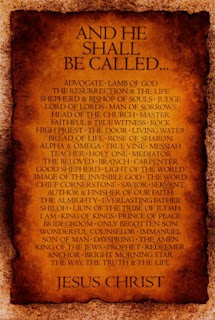 Jesus Christ fulfilled many names prophesied about Him and will fulfill many more. In studying Psalm 91, believers know God in the beginning of this Psalm as "Most High", "Almighty", "Lord" and "God".
"Most High" or Elyon is the portrayal of God as incomparable. Nobody is higher than Him. "Almighty" or Shaddai is the God of more than enough. When speaking of God's capabilities and provisions, He is not just satisfactory with His love and blessings, He is abundant. 2 Corinthians 9:8 says, "And God is able to bless you abundantly, so that in all things at all times, having all that you need, you will abound in every good work." Yehovah/Yahweh or "Lord" is the covenant-keeping God. Did you know that Jesus' name in Hebrew is Yeshua? And this name translated means the covenant-keeping God saves (Yahweh saves)! Then "God" in the second verse of Psalm 91 or Elohim refers to Him as Creator and/or Supreme Spirit.

Then a major shift in perspective happens in Psalm 91 when the reader reaches verse 14. Here, God is speaking directly to the individual who has decided to follow Him. The verse reads,
The Pritchard Paraphrase for believers of this now goes - Because he has chosen to love me by believing in my Son, I will deliver him from everlasting damnation; I will place him on high in heavenly places because of my Son and because he knows my name. This begs the question then - What is God's Name?

Notice that the verse mentions the word "name" as singular. This is why I started out this teaching with the observations of Christ's many titles now and future. Also, the rest of the Psalm states - "He will call on me, and I will answer him; I will be with him in trouble, I will deliver him and honor him. With long life I will satisfy him and show him my salvation." Here, God declares He will perform lavish, loving actions. Because of these actions I believe the Christian knows God by a very personal name - Father.

The Old Testament foreshadowed many times the Father's Love in sending The Messiah, but one particular instance stands out to me - Abraham's obedience to sacrifice his only son Isaac. Fast forward hundreds of years, when Christ was here and Jesus Himself had this to say about who He came to reveal.

"Thomas said to him, 'Lord, we don’t know where you are going, so how can we know the way?'

Jesus answered, 'I am the way and the truth and the life. No one comes to the Father except through me. If you really know me, you will know my Father as well. From now on, you do know him and have seen him.'

Philip said, 'Lord, show us the Father and that will be enough for us.'

Jesus answered: 'Don’t you know me, Philip, even after I have been among you such a long time? Anyone who has seen me has seen the Father. How can you say, ‘Show us the Father’? Don’t you believe that I am in the Father, and that the Father is in me?

The words I say to you I do not speak on my own authority. Rather, it is the Father, living in me, who is doing his work. Believe me when I say that I am in the Father and the Father is in me; or at least believe on the evidence of the works themselves.

Very truly I tell you, whoever believes in me will do the works I have been doing, and they will do even greater things than these, because I am going to the Father. And I will do whatever you ask in my name, so that the Father may be glorified in the Son. You may ask me for anything in my name, and I will do it.'" (John 14:5-14)

Jesus prayed many times in private. I have often wondered what He might have prayed about in those one-on-ones with Father God. However, there is at least one place in Scripture where the reader does not have to guess and lo and behold it pertains to Jesus revealing His Father to mankind - John 17:25-26.

“Righteous Father, though the world does not know you, I know you, and they know that you have sent me. I have made you known to them, and will continue to make you known in order that the love you have for me may be in them and that I myself may be in them.”

Hebrews 1:3 supports the unity of Father and Son when the writer said, "The Son is the radiance of God’s glory and the exact representation of his being, sustaining all things by his powerful word. After he had provided purification for sins, he sat down at the right hand of the Majesty in heaven."

True, Father God is Most High, Almighty, Lord and Creator God. However, because of His Son's sacrifice and victory for all we can know Spirit, Son and Father. We can know His Spirit as He dwells with us, His Son as He mediates for us and Father God who communicates His love to us through them both daily. Every good and perfect gift comes From The Father (James 1:17).
Email Post