CLOTHED IN HIS RIGHTEOUSNESS 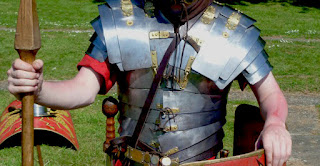 God has secured your right-standing with Him through Christ's sacrificial death and His resurrection, so why are we instructed to wear a breastplate of righteousness or any garment connected with righteousness? (Eph. 6:14; 2 Cor. 6:7; Isa. 59:17) Because believers have not been glorified in body, mind and spirit - yet. We still have to live daily in this God-rebellious, corrupted world and its negative influences.

In order to combat those previously mentioned things and the "devil's schemes", we are encouraged to "Put on the full armor of God, so that you can take your stand against the devil’s schemes." When Paul used the word "schemes" in Ephesians 6:11, he was conveying mind games, mind tricks and/or deceptions the devil uses against us. If I was thinking like the devil and trying to combat God I would seek to kill, steal and destroy what God holds as precious - everyone. Knowing The Truth, I would seek to lie about it in order to keep those from entering the Kingdom. Then for those who believe, I would lie about The Word of God, kill The Word in them, steal The Word and their joy, then destroy their faith through doubt in His Righteousness. Do you see the need for wearing such a piece of armor daily now?

This necessity is noted as a specific piece of armor in Ephesians 6:14 that we need to have God dress us in daily by prayer, it says, "Stand firm then, ...with the breastplate of righteousness in place.". This putting on has no bearing on losing and regaining our Salvation. Our right-standing for eternity with Father God, our Redemption, was once and for all through Christ Jesus (Heb. 7:27). However, this action, this putting on of the breastplate of His Righteousness, does require consistent attention on our part to stay in right relationship or under God's favor.

The confidence, boldness and assurance believers have in our righteousness through Christ is being attacked and held captive by the world system, humanity and the devil. However, not only does the Breastplate of Righteousness act as a defensive mechanism but it is an offensive weapon as well.

When Roman soldiers would march or just walk around in their breastplate, the individual plates would cause much more of a luster than if the soldier were stationary. So, when he went into battle or was attacked out of the blue, the light from the Breastplate blinded his enemies. This is how Christ can operate in our lives - the light that gets noticed for drawing others to Him and the blinding light to our enemies or challenges of life.

As you can imagine, our understanding, accepting and wearing of His Righteousness will thoroughly affect your prayer-life. However, His Righteousness should get us excited about the many possibilities God can use us to reach and help the world. Mr. Rick Renner supports this by saying, "When you have been positively influenced by an understanding of righteousness, it gives you the assurance you need to step out and boldly do the work of God." (p.305, Dressed To Kill) But for those believers who forget or neglect to pray for The Breastplate of Righteousness on a daily basis - there is the other side of the coin. Mr. Renner helps me out here also - "You must have your breastplate of righteousness firmly fixed in place when you begin your confrontation with the adversary, or he will do everything within his power to remove your victory and eliminate your godly influence in other people's lives!" (p.307, Dressed To Kill)

IF Christians truly grasped the protected right-standing we have through faith in Christ's sacrifice and victory, then the world would be an even better place to live. Why? Because we would treasure it more, use it more against our challenges and share it more with those that do not have His Righteousness in their lives. Christians really need to own their belief in their right-standing with Father God through Christ Jesus! The by-product of this in our lives is not arrogance, but the aforementioned confidence, assurance and the overcoming attitude for challenges.

1 John 5:14-15 says, "This is the confidence we have in approaching God: that if we ask anything according to his will, he hears us. And if we know that he hears us—whatever we ask—we know that we have what we asked of him."

Notice that the confidence or assurance is "that if we ask anything according to his will He hears us". The other side of the coin is that if we don't, He won't. If we ask something that is not of His will, God is not listening! This screams for a "therefore". Therefore, be in right-standing with God so that you are asking according to His will, then - when He hears us - "whatever we ask, we know that we have what we asked of Him."

"Stand firm then, with the belt of truth buckled around your waist, with the breastplate of righteousness in place, ..." (Eph. 6:14)
Email Post