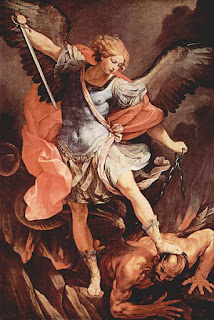 Peter, John and Paul team-up to teach believers about the unfriendly life we enter from day one. John mentions the world (1 Jn. 2:16), Paul documents the flesh (Gal. 5:19-21), while Peter and John call-out the devil (1 Peter 5:8; Jn. 10:10). These are not only stumbling blocks in our lives but enemies of our souls.

According to 1 John 2:16, The World consists of the lust of the flesh, lust of the eyes and pride of life. Notice that John stresses "the lust of..." in the first two worldly enemies. This is the spirit of lust in the kingdom of darkness. It has responsibility over influencing our flesh - sinful desires that do not line-up with God's will for our lives and our eyes that deal with covetousness - something or someone we see and desire but should not seek for whatever reason. The pride of life will always maintain you can do whatever without any assistance from others, especially God's help.

1 Peter 5:8 speaks to an actual enemy and his nature - "Be alert and of sober mind. Your enemy the devil prowls around like a roaring lion looking for someone to devour." In John 10:10 Jesus gives the enemy a title of "thief" and describes his modes of operation - "The thief comes only to steal, kill and destroy;". But Jesus follows up this verse with what He came to do - "I have come that they may have life and have it to the full."

In fact, for The World, John records Jesus encouraging all who believe in Him that He has "overcome the world" - “I have told you these things, so that in me you may have peace. In this world you will have trouble. But take heart! I have overcome the world.” (Jn. 16:33)

For all our fleshly/non-Godly desires, Jesus Christ has paid the ultimate price - His life-blood. "For God so loved the world that he gave his one and only Son, that whoever believes in him shall not perish but have eternal life. For God did not send his Son into the world to condemn the world, but to save the world through him." (Jn. 3:16-17)

"For what the law was powerless to do because it was weakened by the flesh, God did by sending his own Son in the likeness of sinful flesh to be a sin offering. And so he condemned sin in the flesh,"  (Romans 8:3)
God, knowing all things and being all-powerful and being everywhere has witnessed Satan's many defeats and final demise. So, God has these events written in Scripture to encourage the believer that there has never been nor ever will be a challenger to God's throne.
"I saw Satan fall like lightening from heaven." (Luke 10:18)

"How you have fallen from heaven, morning star, son of the dawn! You have been cast down to the earth, you who once laid low the nations!
You said in your heart, “I will ascend to the heavens; I will raise my throne above the stars of God; I will sit enthroned on the mount of assembly, on the utmost heights of Mount Zaphon. I will ascend above the tops of the clouds; I will make myself like the Most High.” But you are brought down to the realm of the dead, to the depths of the pit.
Those who see you stare at you, they ponder your fate: “Is this the man who shook the earth and made kingdoms tremble, the man who made the world a wilderness, who overthrew its cities and would not let his captives go home?”
All the kings of the nations lie in state,each in his own tomb. But you are cast out of your tomb like a rejected branch; you are covered with the slain, with those pierced by the sword, those who descend to the stones of the pit. Like a corpse trampled underfoot, you will not join them in burial, for you have destroyed your land and killed your people." (Isaiah 14:12-20)
"And I saw an angel coming down out of heaven, having the key to the Abyss and holding in his hand a great chain. He seized the dragon, that ancient serpent, who is the devil, or Satan, and bound him for a thousand years. He threw him into the Abyss, and locked and sealed it over him, to keep him from deceiving the nations anymore until the thousand years were ended. After that, he must be set free for a short time.
When the thousand years are over, Satan will be released from his prison and will go out to deceive the nations in the four corners of the earth—Gog and Magog—and to gather them for battle. In number they are like the sand on the seashore. They marched across the breadth of the earth and surrounded the camp of God’s people, the city he loves. But fire came down from heaven and devoured them. And the devil, who deceived them, was thrown into the lake of burning sulfur, where the beast and the false prophet had been thrown. They will be tormented day and night for ever and ever." (Revelation 20:1-3, 7-10)
Though we come into this life with worldly enemies, a sinful nature and an adversary that works non-stop to steal from us, kill us and destroy us - believers in Christ have Christ Jesus as the Victor over All these and anything else that could be imagined. The song "Oh Victory In Jesus" comes to mind right now.
However, the total victory has not manifested yet. Until then we must hand over the direction of our thoughts and behavior to the Holy Spirit. To help with this Paul takes chapter five in Galatians and stresses Life in the Spirit. Read this chapter as soon as possible. This is our challenge - to live a Spirit-filled, Spirit-led life while knowing we have Defeated Foes.
Email Post