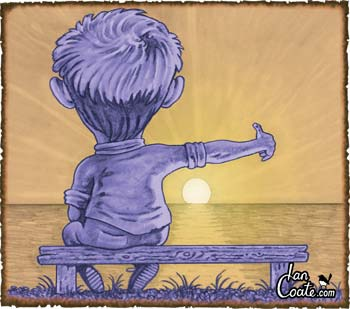 As a Christian, sometimes I wonder with the world that we live in if it's hard to believe in an invisible God. With so much emphasis placed on proof of our senses, faith in God takes a beating. Even if believers are confident in what they hope for and assured about what they do not see, the spirit of doubt is always there to say, But you can always trust your eyes. How untrue this is now-a-days with the video editing power and other visual manipulative tools humans have at their disposal.

But scripture makes it plain that if we just look around at the world we live in, we will find the invisible qualities of God. Paul says, “For since the creation of the world God’s invisible qualities – His eternal power and divine nature – have been clearly seen, being understood from what has been made, so that people are without excuse.” (Romans 1:20) To me, this means when we look at nature that has countless cases of design upon it, then there must be a Designer. There are too many cycles, duties and roles that the weather, animals, humans and even micro-organisms contain and perform for someone to conclude there is not a Master Designer/Planner.

Whether we see something or not, God is responsible. Colossians 1:16 speaks to this by saying, “For in him all things were created: things in heaven and on earth, visible and invisible, whether thrones or powers or rulers or authorities; all things have been created through him and for him.” Visible events are a no-brainer experience, while many invisible experiences rely on their effects. With electricity, we cannot see the flow of power but we know it is there when the light comes on. We cannot see the wind but we know it is there when leaves are disturbed in the trees. And we can't see a current in the sea/ocean, but we know the current is there by the surface waters moving a certain direction and moving a vessel on top in that same direction.

However, from a realm of invisibility God has chosen to make himself known. Throughout history, God has manifested his being in many different forms. Whether God embodied Himself in an audible form, a burning Bush, pillar of cloud, a pillar of fire, Jesus Christ or the Holy Spirit within each believer – God stepped out of the invisible.

Why was God cloaked in the unseen? Why all the different manifestations? Was it that God is so Holy or that humanity’s fall was so great or both? I believe both answers are correct. There was a time when humanity, represented in Adam and Eve, walked with God and saw Him as we see and experience each other’s company today. But after sin or the disobedient nature entered the picture for all of creation, it might seem as though God withdrew back into a tortoise shell of invisibility, but we were the ones who made the mistake and fell. God was the one that reached down and out to humanity with His only Son, Christ Jesus, and died for all of us. The matter was His timing.

I can’t wait to see and speak with Christ like I hold everyday conversations now. Scripture says in Colossians 1:15 about Jesus – “The Son is the image of the invisible God, the firstborn over all creation.” Inspired by the Holy Spirit, John said, “In the beginning was the Word and the Word was with God and the Word was God. He (The Word) was with God in the beginning. Through Him all things were made; without Him nothing was made that has been made.” (John 1:1-3, brackets mine). The Word of God is what Father God, the Holy Spirit and all of Heaven before creation knew the second person of the Trinity as and still do. Because of relationship, our relationship to Father God, we know The Word of God as Christ Jesus, Son of God.

What an incredible, personal manifestation of God’s Word and presence with us through Jesus Christ! As stated before, The Word of God broke-in on history in the form of The Angel of The Lord and The Burning Bush, but Father God chose to clothe His Word with His own creation of humanity in Jesus The Messiah. However, this entire man would also be entirely The Word of God – Son of God and Son of Man. There would never be a transformation or glorification that humanity could strive for and obtain to regain that face-to-face accord we had with God and therefore redeem our relationship. The life-blood sacrifice of the perfect God-man was the demand.

Although the Disciples visually saw Jesus ascend to Father God’s right hand, they also saw two angels at that moment and heard them say, “This same Jesus, who has been taken from you into heaven, will come back in the same way you have seen Him go into heaven.” (Acts 1:11) We do live in a world heavily focused on our senses. However, God has made His presence and plan clear by sending Christ Jesus and the fulfillment of all the prophecies concerning Christ’s first visitation skyrockets the believer’s confidence in the hope of His return that we do not see yet as He continues to be The Invisible God.