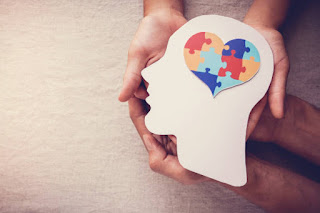 Just because you accept Christ as your Savior does not mean you receive an exemption from the trials, challenges, hardships and heartaches of life. There are a plethora of influences that can distract the believer's mind from God. However, the challenge(s) of negative mental health issues like our rebellious nature, our own imaginations, our environment and our enemy - Satan, must be dealt with promptly. The Bible says much about the mind. The topic was important in the Old and New Testament days and remains important today. Some would say this subject has reached critical status. I believe we all have battled our own mental challenges within the grand scope of the mental health spectrum. I have had mental struggles and am a true believer that many of the issues today begin in our mind. The wonderful benefit believers receive is the Holy Spirit, to encourage, support, lead and instruct us when times get tough.

I have heard the slogan stated, “Do not be so heavenly minded you are no earthly good.” The idea has some merit. To go along with this slogan I have heard as I was growing up the saying, “Get your head out of the clouds.” I believe as long as we keep grounded our gaze should remain skyward, toward the future, on improving and imagining God’s promises fulfilled. To me, being heavenly minded will make me earthly good. Focusing on heavenly concepts will fuel my earthly motivations.

Thoughts and actions are strongly linked. In all things, good and evil, wisdom is found in considering the source. For that which is good, considering the source allows for us to give thanks, appreciation and capitalize on the goodness. For that which is evil, considering the source allows for us to avoid or rebuke the person, place or thing completely.
A huge player in negative mental health challenges is the rebellious nature humans have as their default mode of operation toward God. Paul makes this clear when he writes the church in Colossae. “Once you were alienated from God and were enemies in your minds because of your evil behavior.” (Colossians 1:21) It is quite a simple matter of natures. Rebellious nature, rebellious desires. Christ-like nature, Christ-like desires. Paul agrees saying, “Those who live according to the sinful nature have their minds set on what that nature desires; but those who live in accordance with the Spirit have their minds set on what the Spirit desires.” (Romans 8:5)

When we do not relinquish our thought life to God's control and operate out of our own means and ways, many times we become our own worst enemy. We conjure thoughts, ideas and imaginations that have no basis in truth. This leads to spinning a web of our own deceitfulness that we are consumed in until all the cobwebs are cleared from our mind.

As a Godly solution to this challenge, Paul encourages us and challenges us to “take every thought captive and make it obey Christ.” (2 Cor. 10:5) Taking every thought captive is a challenge, but the more you practice the more you are made perfect. Mr. Rick Renner qualifies the phrase "take every thought captive" by saying - "The words 'bringing into captivity' [KJV] are from the Greek word aichmalotidzo, which pictured a soldier who has captured an enemy and now leads him into captivity with the point of a sharpened spear thrust into the flesh in his back. The captured enemy knows that if he tries to move or get away, the Roman soldier will shove that spear clear through his torso and kill him. Therefore, this captive doesn't dare move but remain silent, submissive and non-resistant." (p.629, Sparkling Gems From the Greek)

Another mental health concern that stems from our thought life is loneliness which can lead to depression which can lead to loss of worth/value and possible suicide. David knew all too well the struggle of keeping a mind in right standing with The Lord. In my favorite Psalm, David penned about having and surrendering "anxious thoughts" (Ps. 139:23). David also admitted to an enemy who influences our thought life, he said, "How long must I wrestle with my thoughts and day after day have sorrow in my heart? How long will my enemy triumph over me?" (Ps. 13:2)

On a logical level, there are too many people in this world and there has been too much history that has transpired in which to say that there is nobody else that has felt your pain and experienced to some degree your problem. On a spiritual, but physical and mental level also, the Christian is never alone. The Holy Spirit lives with the believer as the Comforter, Advocate, Helper and Friend throughout life but especially during times when our mind is assaulted by our own imaginations or outside forces.

Sometimes, in considering the source of negative mental health challenges, the environment is an influence. Paul quotes the Greek poet Menander to emphasize this point when he says, “Bad company corrupts good character.” (1 Cor. 15:33) Just as bad company, places or things corrupt, the opposite is true - good company, places and things purify. Ever heard a phrase similar to - "You can take a person out of the mountains, but you can't take the mountains out of the person."? So, the answer is to maintain a positive support group and surround yourself with images, people, places and things that build good character in you.

Satan is not just a myth or imaginary boogyman used as a scare tactic to encourage people to behave correctly. The Son of God encountered Satan in the wilderness and was tempted by him. Each time there was a temptation, Jesus rebuked it with His own written Word. The devil has been around long enough that he knows what makes people tick. Paul, in his letter to the church in Ephesus, also spoke to Satan's tricks. "Put on the full armor of God, so that you can take your stand against the devil’s schemes." (Ephesians 6:11) The word "schemes" translates to mind games.
So the next time you discern a mental attack from the enemy, remember the armor of God, in particular the Helmet of Salvation and quote whatever God's Word has to say about the matter.

Jesus, spoke to Satan as the devil manipulated Peter momentarily, Jesus said - "...you do not have in mind the things of God, but the things of man." (Matthew 16:23) Notice that Jesus stated Satan's agenda is keeping humanity's focus on ourselves - "the things of man".

Remember what Christ told His disciples as He sent them out to minister? "Therefore be as shrewd as snakes and as innocent as doves." (Matthew 10:16) The enemy is crafty, so believers must be even moreso and it all starts with the mind.

Some helps, based in Scripture, for the Christian who might be struggling with some degree of negative mental health challenges are as follows:
Solomon supplies us with the final remedy I will mention in Proverbs 1:23 - "Repent at my rebuke! Then I will pour out my thoughts to you, I will make known to you my teachings."

Many Christians know the call to Repent and associate the word with confession of all wrong doings against God. Jesus proclaimed it, but there is no account of Him sitting and listening to everyone's confessions - "From that time on Jesus began to preach, 'Repent, for the kingdom of heaven has come near.'" (Matthew 4:17)

The word that Jesus was using for Repent, as He walked the roads of Israel so many years ago, is metanoeo (met-an-o-eh-o), meaning you think differently, you reconsider. But more than that, it is a compound word (two words forming one). The first word is meta meaning hereafter. The second word is noieo meaning think differently. When you combine the two you have Hereafter Think Differently - Metanoeo. So, you have - Hereafter think differently for the kingdom of Heaven has come near.

I have heard it said that to repent is to turn 180 degrees in a given situation. However, we can all repent, change our minds completely about something and leave God out of the picture. True repentance involves dropping your view and all other views and accepting Christ’s perspectives. One of my fellow bloggers, Bobby Sparks, described repentance really well, he said, "Repentance is giving up our thoughts, and opinions, and replacing them with God's thoughts, and his truth."

To combat the negative mental health issues of today and all the many ill spin-offs, Christians need to grasp what it means to have the mind of Christ. To get us started, I will conclude with the inspiration of the Holy Spirit through Paul to the believers in Philippi -